Nicaraguan police have raided the home of opposition leader and potential presidential candidate Cristiana Chamorro, escalating a political battle ahead of elections later this year.

Her brother, Carlos Fernando Chamorro, director of the independent news outlet Confidencial, confirmed Wednesday’s raid on Twitter and said his sister had been ordered to be detained.

Social media and local television broadcast live images of police entering and surrounding Chamorro’s home in Managua, the capital. Officers could be seen using force to eject journalists who had arrived to cover the scene.

Nicaraguan prosecutors sought Chamorro’s arrest for money laundering and other crimes, including a lesser citation for misrepresentation, earlier this week.

The 67-year-old journalist, who does not belong to a political party, is regarded as a serious challenger to President Daniel Ortega in November presidential elections, although he has not confirmed he will seek a fourth term.

A judge in the capital Managua put out the arrest order, acceding to a request from the attorney general, a statement from judicial authorities said.

The attorney general also on Tuesday formally sought Chamorro’s disqualification from holding public office due to the criminal investigation launched against her.

Chamorro denies the charges, calling them a “farce” that aims to prevent her from seeking the presidency. Neither Chamorro nor her representatives could immediately be reached for comment by the Reuters news agency.

“Most of the opposition believes this is a way to try to eliminate all of the most prominent opposition leaders, ahead of this year’s presidential elections,” Al Jazeera’s Lucia Newman reported from Santiago, Chile, after the police raid.

“She would be the third … would-be presidential candidate that has been imprisoned,” Newman said, adding that “two of the opposition parties have now been declared illegal”.

Efforts to disqualify Chamorro from running have been met with criticism from the United States, the Organization of American States (OAS) and others.

In a statement on Wednesday, OAS said the “process of systematic and repeated violations of the rule of law and of fundamental freedoms” was an “attack on democracy”.

US Secretary of State Antony Blinken also said on Twitter that preventing Chamorro from competing “reflects Ortega’s fear of free and fair elections”.

Statement from the OAS General Secretariat on the Request for the Disqualification of Cristiana Chamorro in Nicaraguahttps://t.co/l8Aj7MNt1v pic.twitter.com/dUBTdFjj1g

Chamorro had recently emerged as a potential unity candidate who may have been able to rally a fractured opposition to defeat Ortega in the November 7 vote. On Tuesday, she announced she would seek a nomination from the opposition.

She is the daughter of Violeta Chamorro, who became president of Nicaragua in a 1990 election, deposing Ortega after his first stint in power. 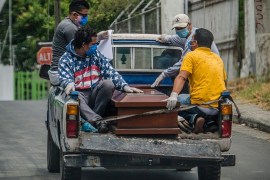 Nicaragua has confirmed 25 cases and eight deaths, but rights groups and experts believe the numbers are far higher. 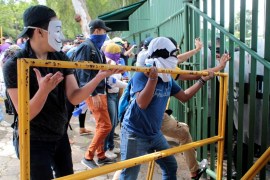 Protesters in Managua able to leave a day after government supporters break into building in a bid to dislodge them. 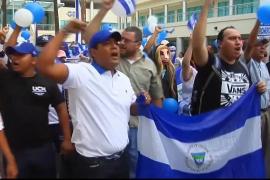