Germany has recognised for the first time that it committed genocide in Namibia during its colonial rule more than a century ago and promised financial support worth more than one billion euros ($1.2bn) to fund infrastructure projects in the African nation.

German settlers killed thousands of Herero and Nama people between 1904 and 1908, after the tribes rebelled against Berlin’s rule in the colony, then called German South West Africa.

Survivors were driven into the desert, where many ended up in concentration camps to be used as slave labour and many died from cold, malnutrition and exhaustion.

“We will now officially refer to these events as what they are from today’s perspective: genocide,” German Foreign Minister Heiko Maas said in a statement on Friday.

“In light of the historical and moral responsibility of Germany, we will ask forgiveness from Namibia and the victims’ descendants for the atrocities committed,” he said.

The news was welcomed by Namibia. “The acceptance on the part of Germany that a genocide was committed is the first step in the right direction,” the country’s President Hage Geingob’s spokesman Alfredo Hengari told AFP news agency.

“It is the basis for the second step, which is an apology, to be followed by reparations,” he said.

The German government has previously acknowledged “moral responsibility” for the killings but Berlin has avoided an official apology to ward off compensation claims.

As a gesture “to recognise the immense suffering inflicted on victims”, Germany will also support the “reconstruction and the development” of Namibia via a financial programme of 1.1 billion euros ($1.34bn), Maas said.

The sum will be paid over 30 years, according to sources close to the negotiations and must primarily benefit the descendants of the Herero and Nama.

Maas, however, stopped short of referring to reparations, saying the payment did not open the way to any “legal request for compensation”.

Germany ruled Namibia from 1884 until it lost the colony during World War I.

In 1904, tensions boiled over when the Herero – deprived of their livestock and land – rose up, followed shortly after by the Nama.

Colonial soldiers carried out mass executions; exiled men, women, and children to the desert where thousands died of thirst; and established infamous concentration camps, such as the one on Shark Island.

The atrocities have poisoned relations between Berlin and Windhoek for years.

In 2015, Germany began formal negotiations with Namibia over the issue and in 2018 it returned skulls and other remains of massacred tribespeople that were used in the colonial-era experiments to assert claims of European racial superiority.

On Thursday,  Hengari told the Reuters news agency that a joint declaration outlining the agreement was made by special envoys of both countries on May 15, at the end of the ninth round of negotiations over the issue.

Hengari also said an official apology from Germany was expected, adding that “implementation modalities can only commence after the president has spoken to affected communities”.

The chief, who unsuccessfully sued Germany for compensation in the United States, said the agreement was not enough for the two communities, which had suffered “irreversible harm” at the hands of German colonial forces.

“We have a problem with that kind of an agreement, which we feel constitutes a complete sellout on the part of the Namibian government,” Rukoro said. 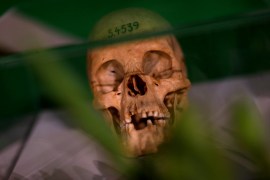 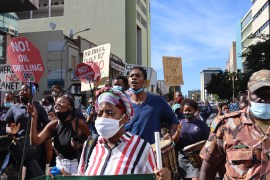 The Kavango Basin could generate billions of barrels of oil, but environmental and Indigenous groups want it protected. 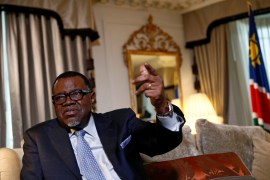 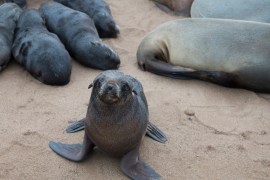 Cause of mass die-off unknown but scientists suspect pollutants, bacterial infection, or malnutrition.