Days of heavy bombardment on the Gaza Strip intensified on Wednesday, with Israeli fighter jets bombing sites belonging to Palestinian armed groups, as well as police buildings and apartment blocks.

Since the offensive began late on Monday, Gaza’s health ministry says at least 84 people have been killed, including 17 children. Nearly 500 others have been wounded.

The Israeli army said about 1,500 rockets have been fired from Gaza towards various locations in Israel, killing at least seven Israelis.

The escalation is the most intense since the seven-week 2014 Israeli war on Gaza. Here’s what led to the most recent flare-up in violence.

Anger has been growing over the forced expulsion of Palestinian families from the occupied East Jerusalem neighbourhood of Sheikh Jarrah, who have been facing multiple court cases filed against them by several pro-settler organisations since 1972.

These organisations claim that land the families live on was originally under Jewish ownership, but Palestinians see this as an extension of an official Israeli policy to displace as many Palestinians from Jerusalem in order to retain a majority Jewish identity in the city.

The United Nations has warned the planned expulsions could amount to “war crimes”.

Protests and scuffles between Palestinians, Israeli settlers and Israeli police have steadily increased since the end of April. The Israeli court in October 2020 ruled that four Palestinian families should vacate their homes, and gave May 2 as the date for their forcible eviction. However, the court date has since been postponed twice.

Recently, there have been confrontations as Palestinians gathered for iftar meals – the breaking of Ramadan fasts – at the homes of those being evicted. The families have since appealed to Israel’s Supreme Court. On Thursday night, at least 30 people were wounded and 15 arrested.

On Friday, tens of thousands of Muslim worshippers filled the Al-Aqsa Mosque compound – Islam’s third holiest site – to pray on the final Friday of Ramadan, with many staying on to protest against the expulsions.

Heavily deployed police fired rubber-coated bullets and stun grenades at protesters who responded by throwing stones. Some 205 Palestinians and 17 Israeli officers were wounded.

Hamas later announced it had given an ultimatum for Israel to remove its security forces from Al-Aqsa compound and Sheikh Jarrah neighbourhood by 6pm local time (15:00 GMT).

By early Tuesday morning, Hamas had fired some 200 rockets towards Israel, according to the Israeli military, including several targeted at Jerusalem, with many intercepted by Israel’s Iron Dome defence system. At least two Israelis were killed.

Meanwhile, Israeli aerial attacks, which hit apartment buildings as well as other targets, killed at least 26 Palestinians, including children, health authorities in Gaza said on Tuesday.

Despite international calls to de-escalate, Israeli Prime Minister Benjamin Netanyahu announced on Tuesday “both the might of the attacks and the frequency of the attacks will be increased” on Gaza.

Stop the fire immediately. We’re escalating towards a full scale war. Leaders on all sides have to take the responsibility of deescalation. The cost of war in Gaza is devastating & is being paid by ordinary people. UN is working w/ all sides to restore calm. Stop the violence now

UN Special Coordinator for the Middle East Peace Process Tor Wennesland, meanwhile, has warned the situation is escalating towards “a full-scale war”. 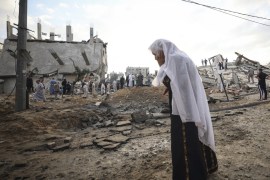 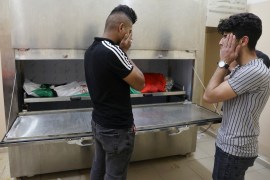 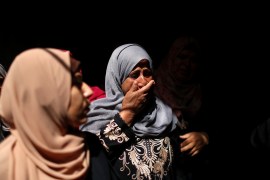 Where will Israel’s assault on Palestinians end?