On April 29, 1997, the Chemical Weapons Convention – which banned the development, production or stockpiling of chemical weapons – came into force.

Since then, over 70,000 metric tonnes of stockpiles and chemical agents have been destroyed under the agreement. According to the Organisation for the Prohibition of Chemical Weapons (OPCW), 193 states, or 98 percent of the world’s population, now live under the protection of the convention.

Only four countries have not signed or ratified the convention. They include: Egypt, South Sudan, North Korea and Israel (signed but not ratified). 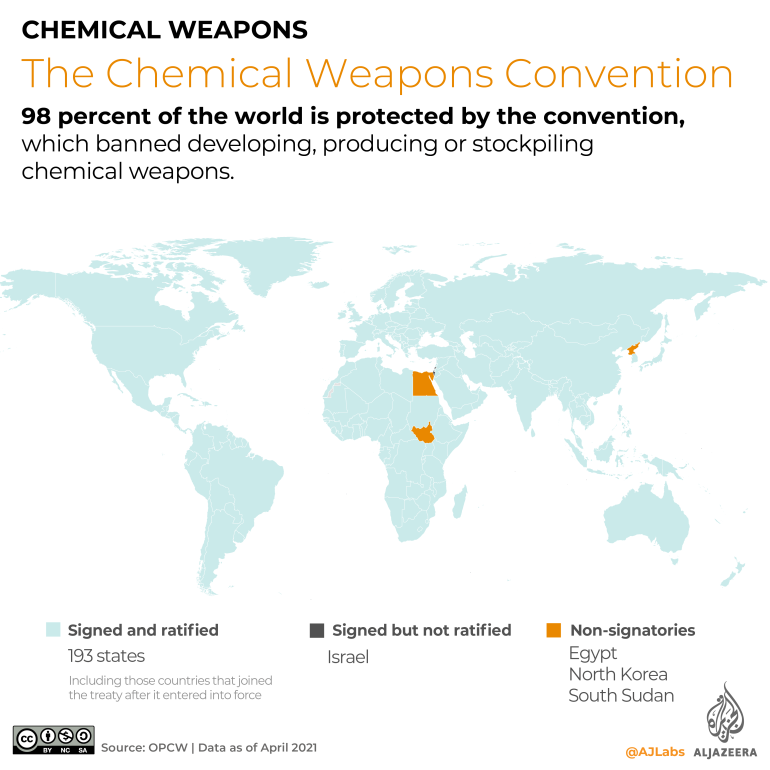 The OPCW has classified five different types of chemical agents used as weapons. They include:

These gas-dispersed chemicals damage the nose, throat and lungs, causing victims to choke. When inhaled, they cause the air sacs in the lungs to secrete fluid, which essentially drowns those affected.

Oily substances that are inhaled or absorbed on contact, affecting the eyes, respiratory tract, and skin, causing large blisters resembling severe burns. Exposure to these agents – dispersed as vapour, liquid or dust – can result in blindness and permanent damage to the respiratory system.

These agents inhibit the ability of cells to use and transfer oxygen, causing the body to suffocate. Blood agents usually enter the body through inhalation and cause damage to vital organs including the heart and lungs.

These toxic agents overstimulate the body’s nervous system, which can lead to difficulty breathing, vomiting, headaches and blurred vision. More potent doses can cause seizures and muscle paralysis. Nerve agents are usually absorbed through the skin and lungs.

Riot control agents such as tear gas are a collection of chemicals that cause irritation to the eyes, skin and respiratory system. Riot control agents are considered chemical weapons if used as a method of warfare but may be permissible for law enforcement, including for domestic riot control purposes. 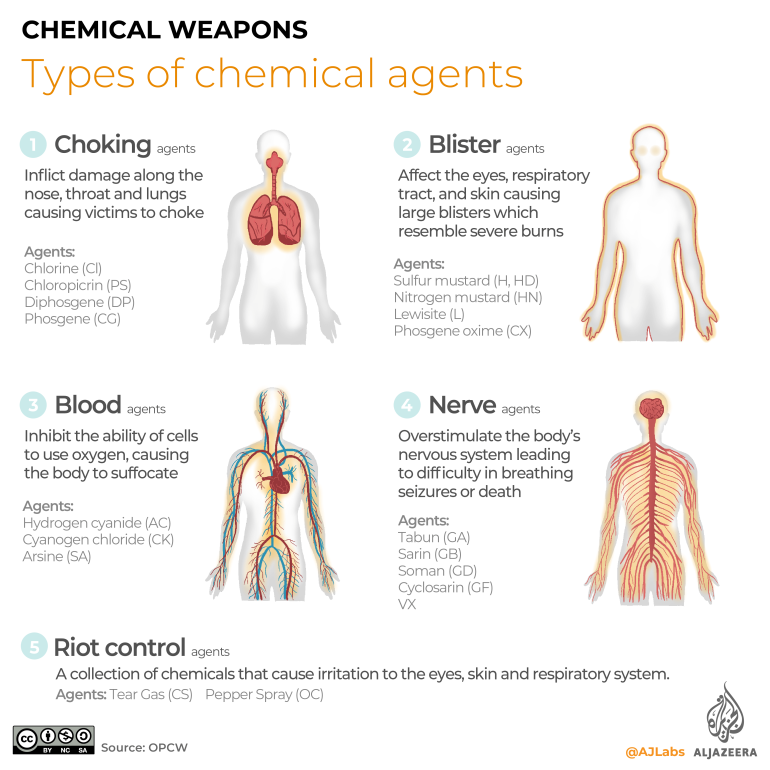 Where have chemical weapons been used?

Chemical weapons were first used during World War I. Poisonous agents, including chlorine gas, phosgene, and mustard gas, were used by German and then British forces, resulting in at least 1.1 million casualties over the course of the four-year war.

Following the war, amid widespread outrage, several countries signed the Geneva Protocol in 1925, banning the use of chemical weapons. The protocol, however, did not prohibit the development, production or stockpiling of such weapons.

Despite the ban, chemical weapons were still used over the next few decades, including during the Italy-Ethiopia War (1935-1936), the China-Japan War (1937-1945) and World War II, in which Nazi Germany used poison gasses in concentration camps to kill civilians.

In the Middle East, during the Yemen War (1963-1967), Egyptian forces used mustard gas and nerve agents to support a coup against the Yemeni monarchy, killing 527 people.

During the 2008/2009 Gaza war, Israel used the controversial chemical agent white phosphorus, which can severely burn people and set fire to homes. Israel has refused to sign both the 1968 Non-Proliferation Treaty, covering the regulation of nuclear arms, and to ratify the Chemical Weapons Convention, which obligates states to submit to international oversight and destroy chemical agents in their possession. Israel has long maintained what it terms “ambiguity” on the question of whether it possesses either nuclear or chemical weapons. 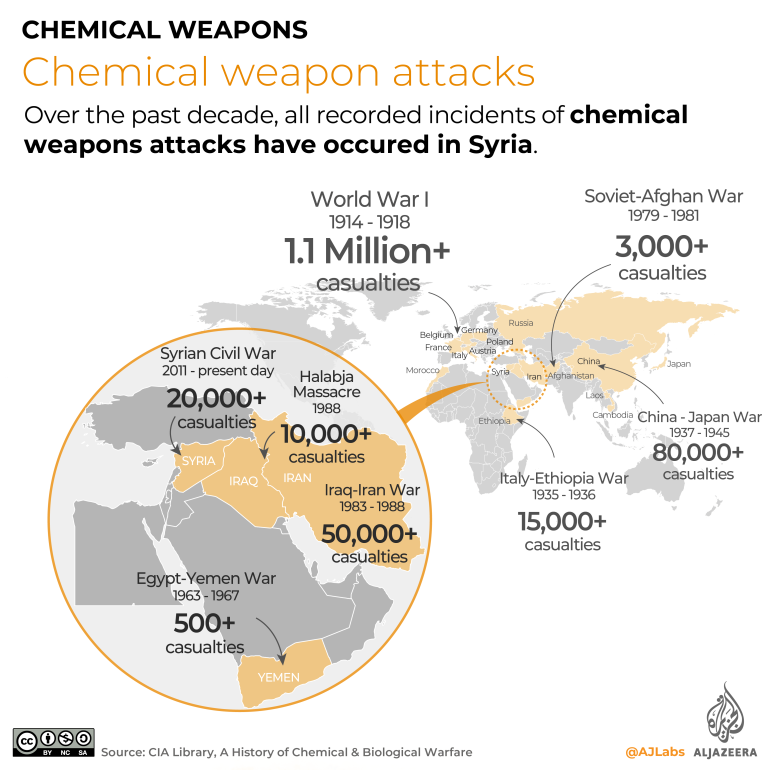 In 2011, a crackdown on pro-democracy demonstrators by Syrian government forces spiraled into a civil war. On July 23, 2012, a Syrian Ministry of Foreign Affairs spokesman confirmed for the first time that Syria possessed chemical weapons but would only be used against “external aggression”. Five months later, on December 23, seven people were reportedly killed by poisonous gas in Homs, which the US blamed on the Syrian military.

During the early hours of August 21, 2013, hundreds were reportedly killed when government forces fired rockets with chemical warheads into the Damascus suburbs of Eastern Ghouta. UN investigators found “clear and convincing evidence” that sarin gas had been used. Evidence suggested that the Syrian government was to blame – which Damascus denied.

For the next four years, several hundred more suspected chemical weapon attacks were reportedly conducted by both the Syrian government and the ISIL (ISIS) armed group.

According to the Berlin-based Global Public Policy Institute, GPPI, between December 2012 and May 2019, 349 chemical weapon attacks were recorded across Syria resulting in at least 1,961 deaths and  18,790 injuries.

They found that at least 67 percent (233) of those attacks had a medium to high confidence level of chemical weapons being used. The choking agent chlorine was used in at least 65 percent of incidents followed by sarin gas (5 percent) and sulfur mustard (2 percent).