The Israeli army rejected HRW’s claims on Wednesday and said investigations had proven the army’s use of white phosphorus was for “operational needs only”.

“Based on the findings at this stage, it is already possible to conclude that the [army’s] use of smoke shells was in accordance with international law”.

“These shells were used for specific operational needs only and in accord with international humanitarian law,” the statement released on Wednesday said.

“The claim that smoke shells were used indiscriminately, or to threaten the civilian population, is baseless.”

The report said that senior commanders must have approved what they saw as a pattern or policy in white phosphorus use.

HRW has called for Israeli senior commanders to be held to account and for an international investigation to take place, since an Israeli Defence Force (IDF) inquiry is likely to be neither “thorough” nor “impartial”.

The 71-page report documents evidence of spent shells and white phosphorus found in residential areas, city streets, a hospital and a UN school.

It follows reports by Amnesty International, the international rights group, and the UN alleging the improper use of white phosphorus by Israel.

Armies typically use the munition to obscure their operations on the ground via the thick smoke created. It can also be used to set targets alight.

The munitions are legal in open areas, but illegal when used unnecessarily and in civilian areas.

Talking to Al Jazeera Abrahams said: “This is our first report of a series in Gaza, because what we saw was truly terrible.”

“I’ve covered five wars and for me personally it was a traumatic experience to go to Gaza,” Abrahams said.

“It is a thoroughly inappropriate way to use this munition. It spreads 116 burning wafers of white phosphorus down in an area of up to 200 metres.”

Abrahams said that Israel’s past use of the munitions in the 2006 Lebanon war and repeated warnings of the proximity of their shelling to populations meant they knew the danger they were subjecting Palestinians to.

“So to us this indicates a pattern, a policy. Investigations of small fish, low level soldiers, is not enough,” Abrahams said.

“We believe top level commanders should be investigated and where there’s evidence they should be held accountable.”

Abrahams called on either the UN Security Council or Ban Ki-Moon, the UN secretary general, appoint an international investigation that looks at all abuses in the war not just attacks on UN locations.

Chris Cobb-Smith, a security consultant who co-authored a report with Amnesty International on the munitions’ use, said that the important point was not the employment of the weapon, but where it was used.

“An important thing to remember about white phosphorus is that it is not an illegal weapons system. It is perfectly legal, but it must be used in the right way,” Cobb-Smith told Al Jazeera.

“It is purely an obscurant. It is purely to provide a smoke screen for soldiers on the battlefield.

“But there is absolutely no military tactical reason to use white phosphorus in a built up area. It can provide no use whatsoever.

“It was used at a time before the IDF actually commenced their ground offensive into Gaza itself. They were miles away from Gaza City when they first used this weapons system.”

Israel originally denied using the munitions during its war on the Gaza Strip which began on December 27 last year, but later said it would hold an internal investigation into its improper use. 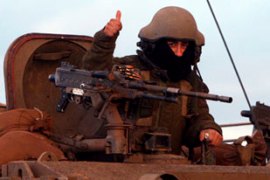 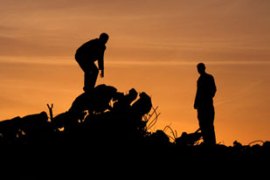 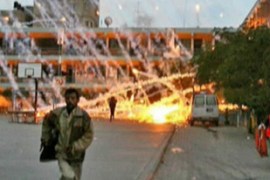 Pictures show alleged Israeli use of white phosphorus munitions on a UN compound. 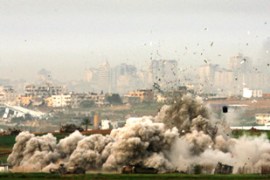 Amnesty says Israel’s use of white phosphorus in Gaza was indiscriminate and illegal.