It has been 10 years since the start of the Syrian uprisings and the country is still mired in a war that has displaced millions and killed hundreds of thousands.

Syria’s economy has deteriorated, pushing almost 80 percent of the country below the poverty line, according to the Red Cross.

Approximately 11 million people need humanitarian assistance, about 6 million are internally displaced and 5.5 million Syrian refugees live in neighbouring countries according to the UNHCR.

Shifting alliances and rapid changes since 2011 have made for a complex conflict that is still raging, particularly in the northwest.

Here we break down how the war unfolded, how territorial control has changed, and who the different players are.

On March 15, 2011, major unrest erupted across the streets of Deraa, Damascus and Aleppo, with protesters demanding democratic reforms and the release of political prisoners.

Protests were triggered by the arrest and torture of a group of teenaged boys a few days earlier in the city of Deraa over graffiti denouncing longtime president Bashar al-Assad.

A violent crackdown and repression by the government followed. In July 2011, defectors from the military announced the formation of the Free Syrian Army, a rebel group aiming to overthrow the government, turning the revolt into a civil war.

Protests continued into 2012, and by 2013 various rebels groups emerged across the country. Later that year, ISIL (ISIS) emerged in northern and eastern Syria after overrunning large portions of Iraq.

A variety of actors are locked in a power struggle in Syria. 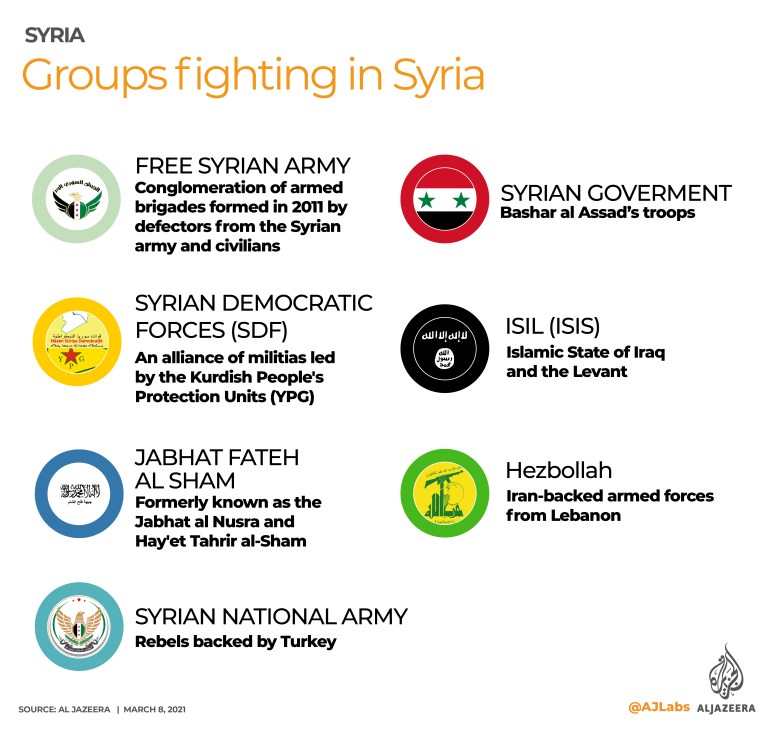 Bashar al-Assad inherited his rule of Syria in 2000, taking over from his father Hafez al-Assad, who had been in power since 1970.

He has ruled the country with an iron fist and has a history of crackdowns on dissidents, using chemical weapons against his people and imprisoning and torturing thousands.

the FSA is a loose conglomeration of armed brigades formed in 2011 by defectors from the Syrian army and civilians backed by Turkey and several Gulf countries.

Since the Battle of Aleppo in December 2016, the FSA has remained in control of limited areas of Idlib in northwestern Syria.

Jabhat al-Nusra formed in Syria in 2011 as an al-Qaeda affiliate within the opposition to the Assad government.

By January 2017, Jabhat Fatah al-Sham rebranded when it merged with several other groups to unite under the banner of Hay’et Tahrir-al Sham.

Currently, HTS maintains that it is “an independent entity that follows no organisation or party”.

Hezbollah is a Shia armed group and a political force based out of Lebanon, backed by Iran. They moved into Syria to support al-Assad’s forces and they currently control no territory in Syria.

This alliance of Kurdish and Arab militias was founded in 2015.

Its makeup largely consists of YPG fighters and smaller groups of Arab, Turkmen and Armenian fighters.

Turkey considers the YPG, which forms the bulk of the SDF forces, an extension of PKK, which has waged an armed campaign for independence against the Turkish government that has killed more than 40,000 people since 1984.

Predominantly known for the brutality of its foreign fighters, organised government systems, and strong social media presence, ISIL rose to power in the vacuum in Syria after 2012 as civil unrest grew. By 2014, it had captured significant land by force and declared the creation of a “caliphate”.

ISIL’s “caliphate” was destroyed in March 2019 but their reemergence looms in the region. In 2014, in its peak of power, it controlled roughly one-third of Iraq and Syria.

The damages of war 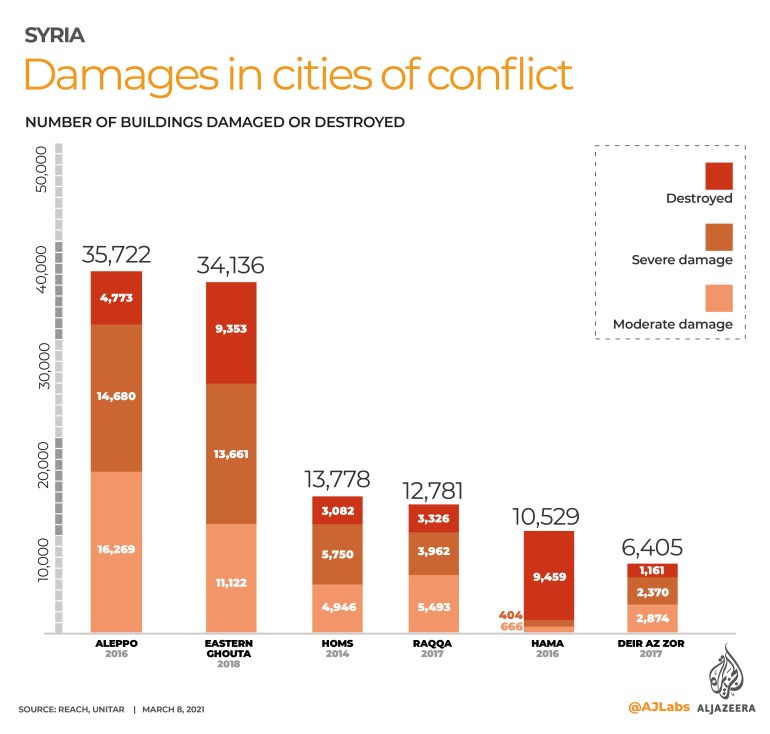 Aleppo was an industrial and economic hub in northwest Syria with nearly 3 million inhabitants at its peak.

In December 2016, the Syrian army scored its biggest victory against the rebels when it recaptured the strategic city. The city had been divided and under rebel control since the beginning of the unrest in 2012.

In 2018, after a fierce seven-week offensive that left much of the city in ruins, the Syrian army regained control of areas that had been held by opposition fighters since 2012.

Raqqa, situated on the Euphrates River in Syria’s north, was the first governorate capital to fall under opposition control after the start of the Syrian uprising in 2011. In 2014, the city was captured by ISIL (ISIS), who declared it their capital.

Raqqa and many villages and towns in the province were devastated by US-led coalition air raids during the anti-ISIL operation between 2016 and 2017. According to some estimates, between 70 and 80 percent of the city was destroyed, and its infrastructure almost completely wiped out.

A UNESCO World Heritage site in central Syria, Palmyra was captured twice by ISIL – first in May 2015 and then again in December the following year.

The group destroyed several ancient wonders including the Temple of Bel, the Temple of Baal Shamin, the Arch of Triumph, and columns in the Valley of the Tombs.

In March 2017, the Syrian army, backed by allied forces and Russian warplanes, recaptured the city.

In 2014, ISIL captured Deir az Zor, an oil-rich governorate located in the east of the country bordering Iraq. The main city was taken by Syrian government forces with help from the SDF in November 2017. It was ISIL’s last urban stronghold in the war-torn country.

The province of Idlib on Syria’s western border with Turkey is currently home to more than three million people, the majority of whom are internally displaced. The FSA has controlled the area since the beginning of the civil unrest.

Slowly, rebel forces have lost control to Assad’s forces. Since December 2019, the Syrian government has renewed its military operations to take over the last opposition stronghold, shelling Idlib’s countryside with the backing of Russian air raids. 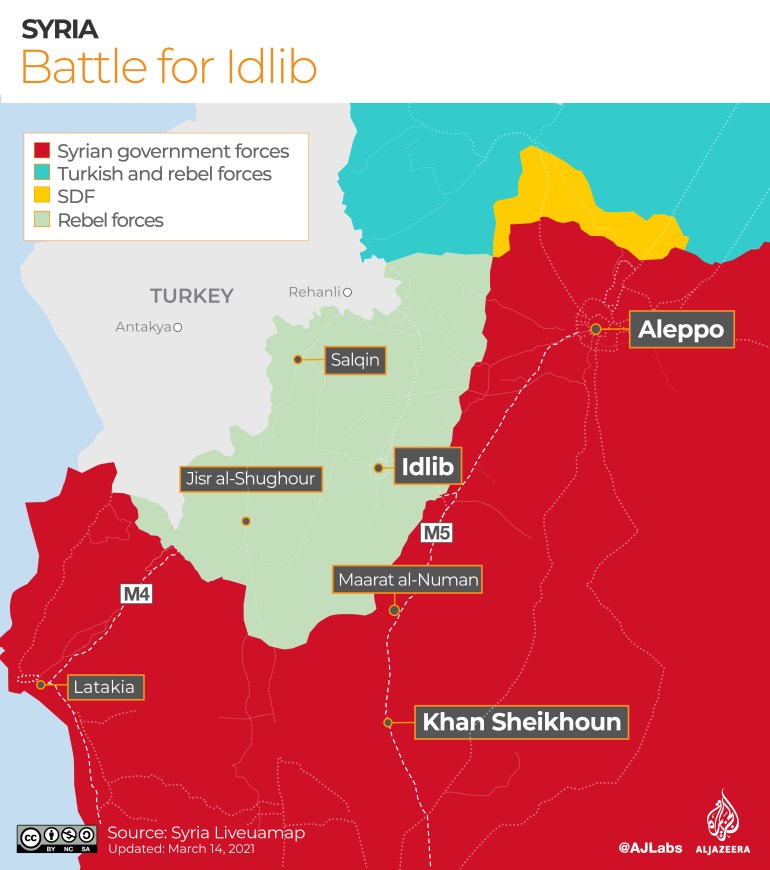 The human cost of war

With colossal damage to homes, schools, hospitals and infrastructure, large parts of Syria have been shattered by the fighting. US government sanctions and a surge of COVID infections has made life even more difficult for war-weary families.

There is limited shelter, fuel is scarce, and food prices are soaring.

According to the UN, Syria is “the worst man-made disaster since World War II”.

9.3 million Syrians are food-insecure, and approximately 4.5 million children are going hungry in the country.

Syrians make up one-third of all the refugees around the world. According to the UNHCR, 80 percent of Syrian refugees live below the poverty line, with limited access to basic services, education or job opportunities.

At least 5.5 million refugees are living in neighbouring countries Iraq, Turkey, Jordan, Lebanon, and Egypt – and within Syria, 6 million people are internally displaced. 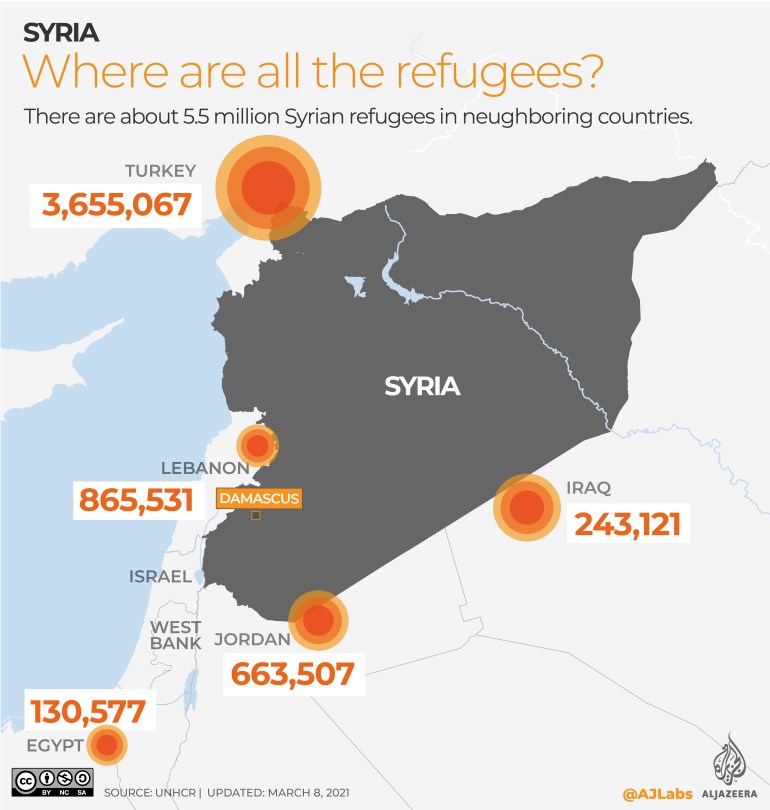