The man infamously photographed with his feet on House Speaker Nancy Pelosi’s desk during the January 6 Capitol riot was released from detention on Monday afternoon.

Richard Barnett, a self-proclaimed white nationalist and apparent follower of the QAnon conspiracy movement, was released due to recent changes making it more difficult to keep people in pretrial detention in the District of Columbia.

The rioters were largely members of far-right and militia movements who had grown close to Trump during his four-year term.

US District Court Judge Christopher Cooper said “January 6 was a criminal effort to undermine one of the essential pillars of our democracy” carried out by “people who were sold and willingly bought a bill of goods that the election was stolen”.

But Cooper did not find evidence that Barnett met the tightened criteria for pretrial detention: “The burden faced by the government, clear and convincing evidence, has just not been met in this case, in my view.”

Barnett’s lawyer told TMZ the accused rioter will be kept in home detention and “is barred from having any weapons in his home”.

The judge told Barnett, who lives in Arkansas, he will be sent back to jail if he violates the terms of his release.

Federal prosecutors said in court documents last week that more than “400 individuals have been charged in connection with the Capitol attack … The investigation continues and the government expects that at least one hundred additional individuals will be charged”.

The scope of the investigation into the riot is unusually large and spans suspects from the entire US.

Members of militia movements, such as the Oath Keepers, have been charged with conspiracy in relation to planning the insurrection.

The charge allows prosecutors to bring cases against members of the conspiracy, even if they committed no crime other than being aware of the plot.

Jon Schaffer, a founding member of both the Oath Keepers and metal band Iced Earth, pleaded guilty to two felony charges of obstructing the certification of the 2020 election and breaching a restricted building on April 16.

He is now cooperating with investigators.

Authorities have also charged 18 members of the far-right Proud Boys with crimes ranging from conspiracy to assaulting a police officer.

Michael Fanone was among the officers attacked that day. He was dragged down a long flight of Capitol stairs and hit with a stun gun, causing a mild heart attack, prosecutors allege.

He was stun-gunned several times and beaten with a flagpole during the Capitol attack.

Fanone said watching Trump and other politicians downplay the events of January 6 has been difficult. 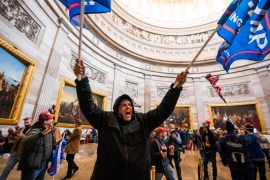 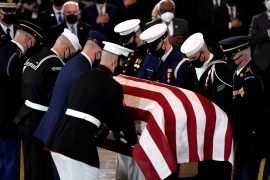 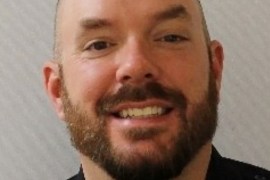 William Evans will be only the sixth person to have the distinction of lying in honour in the Capitol Rotunda.