A long-awaited report into allegations of abuse committed during former Gambian President Yahya Jammeh’s 22-year rule has recommended to the government to pursue criminal charges against those responsible.

Rights groups have long pushed for prosecutions for the litany of alleged crimes, such as the use of death squads and rape, committed during Jammeh’s time in office, which ended in 2017.

The 14,000-page document was handed on Thursday by the Truth, Reconciliation and Reparations Commission (TRRC) to President Adama Barrow, nine days before a presidential election in which the exiled Jammeh has urged his supporters to vote for an opposition coalition.

In all, 240-250 people died at the hands of the state or its agents, the commission said. It recommended that the “persons who bear the greatest responsibility for abuses” be prosecuted, but did not name anyone. “To forgive and forget with impunity the violations and abuses … would not only undermine reconciliation but would also constitute a massive and egregious cover-up of the crimes committed,” the TRRC said in a statement.

The findings of the panel come after more than two years of hearings into Jammeh-era crimes. Nearly 400 witnesses gave chilling evidence about state-sanctioned torture, death squads, rape and “witch hunts”, often at the hands of the “Junglers”, as Jammeh’s death squads were known.

Malick Jatta, an army lieutenant close to Jammeh, said the former president paid more than $1,000 each to members of his security service who killed newspaper editor Deyda Hydara in 2004, according to the Reuters news agency. Sergeant Omar Jallow told the commission that in 2005, Jammeh ordered the killing of 59 unarmed migrants that Jammeh thought had come to overthrow him. Fatou Jallow, the winner of a 2014 beauty pageant, testified that Jammeh raped her when she was 19.

Jammeh, who fled to Equatorial Guinea after refusing to accept defeat to Barrow in a 2016 election, has previously denied allegations of wrongdoing.

“There is this will among human rights lawyers to see Yahya Jammeh, who is now free and living in exile in Equatorial Guinea, to face justice for those crimes committed under his rule,” said Al Jazeera’s Nicolas Haque, who has reported extensively from The Gambia.

“There is more freedom for people to express themselves than during the time of Jammeh, but there is a sense that people now want to go further than just expressing their grievances – they wanna see the rule of law being enacted and justice being served.”

Barrow or his successor will have six months to decide how to respond to the report. It could form the basis for criminal proceedings against Jammeh and others.

“I assure (the victims and their families) that my government will ensure that justice is done,” Barrow said in a statement, “but I urge them to be patient and allow the legal process to take its course.”

Even if Jammeh is found guilty, he may not face punishment. Under Gambian law, a former head of state cannot be prosecuted unless parliament approves proceedings by a two-thirds majority.

Rights groups, which were eagerly awaiting the report, welcomed the news that the TRRC has urged prosecutions.

Reed Brody, a human rights lawyer who works with Jammeh-era victims, said in a statement that “there is no doubt that Yahya Jammeh is at the top of the list of former officials whose prosecutions it is recommending.”

Amnesty International also said in a statement that The Gambia must bring charges against wrongdoers to ensure that “state-sponsored human rights violations are never repeated”.

Despite the magnitude of abuse allegations facing Jammeh, the 56-year-old retains a considerable following in The Gambia. Many supporters are pushing for his return from exile.

His influence has been a key issue in the run-up to a presidential election on December 4 – the first since Jammeh’s departure.

Jammeh addressed a campaign rally remotely this month, arguing that Barrow had “rigged” the 2016 elections.

Barrow, for his part, sought an alliance with Jammeh’s APRC party in September, a move viewed by some as an electoral ploy.

Rights activists denounced the alliance, which also stirred fears that it could lead to Jammeh’s return. But Jammeh subsequently disavowed the electoral pact, which he said was made without his knowledge, and his supporters have formed a rival party. 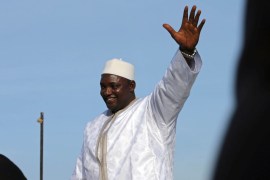 The Gambia elections: Meet the men running for president 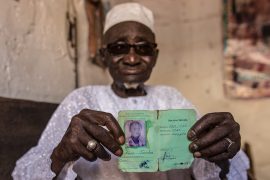 The last warrior of Africa’s ‘Forgotten Army’: Gambia and WWII

Ebou Janha, 102, is the only surviving veteran of a regiment of Gambian soldiers who fought for the British in Burma. 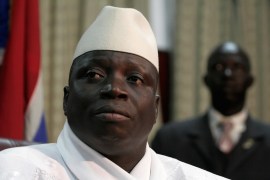