Five police officers were injured in the Netherlands and at least 40 people were arrested across three provinces as violent protests against COVID restrictions continued for a second night.

Officers in riot gear charged groups of demonstrators in The Hague late on Saturday night, with protesters pelting police with stones and fireworks, while a water cannon was used to put out a pile of blazing bicycles at a busy intersection.

Five officers were hurt in The Hague, one of them seriously, a police statement said. Police carried out charges on horseback and arrested 19 people, one of them for throwing a rock through the windshield of a passing ambulance.

Another 13 arrests were reported by police in two towns in the southern province of Limburg, while disturbances were also reported in the northern province of Flevoland. Eight people were arrested in the town of Urk, where a COVID-19 testing station was torched earlier this year.

Meanwhile, angry fans disrupted two football matches being played behind closed doors because of coronavirus rules, according to Dutch media.

The first division matches in the western city of Alkmaar and the eastern city of Almelo, between AZ-NEC and Heracles-Fortuna Sittard had to be stopped for several minutes, Dutch media said.

At least three people were wounded and 51 arrested in Rotterdam.

It was one of the worst outbreaks of violence in the Netherlands since coronavirus measures were first imposed last year. In January, rioters also attacked police and set fires on the streets of Rotterdam after a curfew came into force.

“The riots and extreme violence against police officers, riot police and firefighters last night in Rotterdam are disgusting to see,” he said in a statement.

“Protesting is a great right in our society, but what we saw last night is simply criminal behaviour. It has nothing to do with demonstrating,” he added.

An independent investigation into the shootings by police was opened, as is the case whenever Dutch police use their weapons.

The Netherlands reimposed some lockdown measures last weekend for an initial three weeks in an effort to slow a resurgence of coronavirus contagion, but daily infections have remained at their highest levels since the start of the pandemic.

The Dutch government is now planning to ban unvaccinated people from entering some venues, the so-called 2G option.

In The Hague on Saturday, a pizza shop owner told the AFP news agency that police had dragged several people out of his shop, smashed the glass in its front door and hit him on the head for “no reason”.

“These people out here are protesting about 2G and the lockdown,” Ferdi Yilmaz said. “They are angry about it.”

AFP correspondents reported seeing police arrest several people in the working-class Schilderswijk neighbourhood of The Hague, with plainclothes officers at one point dragging a woman out of a car.

In a statement, The Hague police said the five injured officers included one who was taken to hospital suffering concussion and two others who suffered hearing damage from loud fireworks.

A rock thrown by rioters smashed the window of a passing ambulance carrying a patient, they said.

In Amsterdam, several thousand protesters showed up for a march around the city’s central Dam square, despite one group having cancelled their rally because of the previous night’s violence.

The march remained peaceful, monitored by a heavy police presence.

Another thousand marched through the southern city of Breda near the Belgian border, carrying banners with slogans such as “No Lockdown”.

But “we’re not rioters. We come in peace,” he said.

Around him, the mood was festive, with some protesters dancing behind floats carrying DJs, dubbed “party buses”. 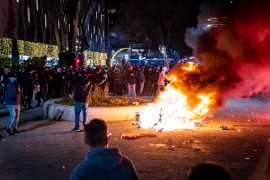 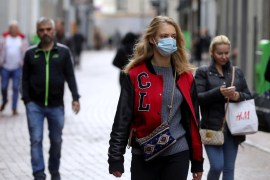 Caretaker PM says government wants to ‘deliver a hard blow to the virus’ as COVID-19 cases surge in the Netherlands. 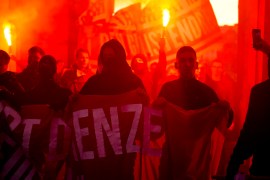 Protesters rally against new restrictions and COVID-19 passes mandated in many European countries. 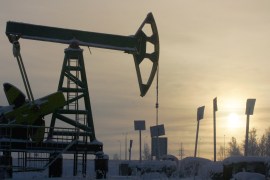