A simmering months-long border crisis along the European Union’s frontiers with Belarus has morphed into a serious geopolitical dispute and stoked fears of a humanitarian disaster.

Since November 8, there has been a sharp uptick in the number of refugees and migrants heading to the Belarus-Poland border in the hope of crossing into the bloc.

It is estimated that thousands are now gathered near the line that divides the two countries.

Those trying to leave Belarus have been denied entry to Poland, with a forbidding barbed wire fence and masses of security forces deployed by Warsaw barring their way.

They are stuck in freezing temperatures, without access to vital supplies or medical care, as fears for their safety mount.

An estimated 3,000 to 4,000 migrants and refugees, many of whom are reportedly from the Middle East and Afghanistan, are camped out in what is effectively a no-man’s-land between Belarus and Poland after being denied entry to the EU nation.

Human rights groups and global bodies have raised concerns for their wellbeing, pointing to a spate of reported deaths on both sides of the border as evidence of the treacherous conditions they face as winter sets in.

Aid workers, lawyers and journalists have been prevented from accessing critical border areas on both sides.

How did the crisis start?

The crisis erupted earlier this year, when longtime Belarusian President Alexander Lukashenko reacted furiously to EU sanctions. The bloc had punished Minsk over its forced diversion of a passenger jet in May and subsequent arrest of a dissident journalist, Roman Protasevich, who was on board.

Months earlier, the EU and the United States penalised Lukashenko’s government for cracking down on dissent after a disputed August 2020 election which handed the 67-year-old a sixth term and provoked mass anti-government protests.

Angered by the toughened measures, Lukashenko hit back by announcing Belarus would stop trying to prevent undocumented migrants and refugees from reaching the EU, arguing the bloc’s sanctions deprived his government of the funds needed to do so.

Since then, EU member states bordering Belarus, including Lithuania, Latvia and Poland, have reported sharp increases in the number of people attempting to cross their borders.

Who has said what?

The EU accuses Minsk of deliberately enticing migrants and refugees to Belarus and then funnelling them westwards with promises of easy entry into the bloc as part of a “hybrid attack” on its member states in retaliation for sanctions.

Lukashenko denies those allegations and charges the EU with violating human rights by denying people safe passage, contrary to international rules of asylum.

There have been reports of illegal so-called “pushbacks” being conducted, with Polish guards accused of returning undocumented migrants to Belarus.

Is Russia playing a role?

But Moscow, which Lukashenko’s government depends on heavily as an ally and creditor, has denied involvement.

It has instead accused Poland and its fellow EU member states of attempting to “strangle” Belarus, which the Kremlin sees as a security buffer against the bloc and the US-headed transatlantic NATO military alliance on its western flank.

Moscow sent paratroopers to Belarus on November 12 for military drills. It had deployed two nuclear-capable strategic bombers on patrol missions over Belarus for the two days prior, on November 10 and 11.

It is unclear, but further escalation looks likely.

The EU is weighing whether to impose yet more sanctions against Minsk in response to the border crisis. The measures, which reportedly could also target airlines the bloc deems to be involved in the situation, could come into effect as soon as November 15.

Belarus continues to deny engineering the crisis and warns it cannot help bring it to an end unless the earlier penalties imposed on Lukashenko’s government by Western powers are lifted.

Minsk has also threatened to cut off Russian gas supplies to Europe through pipelines that transit through Belarusian territory in retaliation for any fresh EU sanctions.

But on November 12, the Kremlin distanced itself from that threat, saying it was not consulted in advance of Lukashenko’s remarks and that it would fulfil its gas delivery contracts.

Europe’s gas market, where prices have hit record highs in recent weeks, would be highly sensitive to any supply disruption. 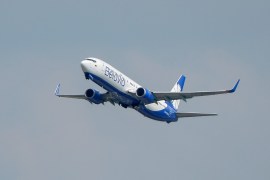 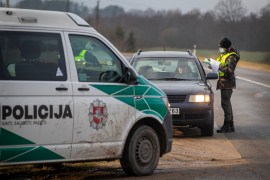 ‘Go back to Minsk!’: Poland’s SMS warning to refugees amid crisis

Cold and tired refugees are repelled by Poland with a brusque text, the start of their bleak attempt to enter the EU. 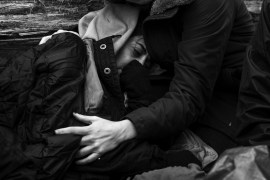 Warsaw takes a hard line on those trying to enter the EU from Belarus, but Polish residents are handing out aid.