Governments around the world have ordered citizens to stay at home and practice physical distancing to help curb the coronavirus pandemic.

In an attempt to contextualise how people’s movements have been affected, tech giant Google recently released its COVID-19 Community Mobility Reports tracker, which makes use of anonymised mobile phone data from 131 countries around the world.

The tracker shows how visits and the length of stay at different places have changed since the widespread introduction of physical distancing guidelines and lockdowns, compared to each country’s average during a five-week period in January and February.

While the data could help public health officials understand patterns of movement in the age of physical distancing, Google has stated that the data is not intended to be used for medical diagnostics or personal travel planning.

The company has produced reports that show how visits and length of stay vary across different locations including residential areas, retail and recreation, groceries and pharmacies, outdoor areas, workplaces and public transit stations.

It is clear that almost the entire planet is spending more time at home. At 35 percent above its average, Bolivia is the country spending the most additional amount of time at home

On March 25, the South American country declared a public health emergency and completely locked down its borders.

Here’s how much more time people are spending at home across the world:

European countries including Italy, Spain, Luxembourg and Liechtenstein have all seen a decrease of over 90 percent in visits to and time spent at recreational locations – including places like restaurants, theme parks and movie theatres. Spain and Italy are currently the hardest-hit countries in Europe with over 250,000 confirmed cases and 28,000 deaths between the two of them.

Here’s how much less time people are spending in retail and recreational locations:

For many of those living in lockdown, a visit to the supermarket for supplies has become one of their only interactions with the outside world. But visits and time spent at supermarkets and pharmacies have decreased significantly over the past few weeks.

Here’s how much less time people are spending at these locations:

For most people the lockdown has also meant fewer visits to parks, beaches and public gardens. However, for a handful of countries, mostly in the northern hemisphere, outdoor visits have increased with the warmer spring weather. South Korea has seen a 51 percent increase followed by Finland (48 percent), Sweden (43 percent), Belarus (41 percent) and Denmark (35 percent).

Mobility trends for places of work also show a considerable decline. At 72 percent below its usual baseline, Jordan has seen the highest decline in workplace visits.

The Middle Eastern country, which was under a nationwide curfew recently, began easing travel restrictions for essential trips from 10am to 6pm.

The biggest decline worldwide has been the amount of time spent in subways, in buses and on trains. The entire world has seen a decrease ranging from six percent in Zimbabwe to 92 percent in Bolivia.

In addition, several national airline carriers have grounded their fleets and have asked governments for billions of dollars to survive. 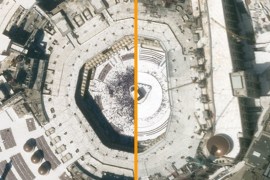 Before and after satellite images show the impact of coronavirus containment measures on cities worldwide.