Many international legal experts, including the United Nations special rapporteur on minorities, say India’s new citizenship law is discriminatory and are calling for international intervention.

Fernand de Varennes, the UN special rapporteur on minorities, told Al Jazeera that there is a danger that millions of members of minority groups such as Muslims will be denied citizenship.

“Many have opined that the exclusion of Muslims as a group from the ambit of the law constitutes an extreme example of discriminatory treatment and that the right of equality without discrimination – particularly if it has a ‘racial’ element – is one of the fundamental principles of international human rights,” de Varennes told Al Jazeera.

‘Sovereign power is not unfettered’

Earlier this month, the UN High Commissioner on Human Rights, Michelle Bachelet, filed an intervention in the Supreme Court to challenge the CAA.

India’s top court is also hearing a petition from Muslims and liberal Indians, who say the law is against the country’s secular constitution. The case has been temporarily suspended because of the lockdown following the coronavirus crisis.

Bachelet’s petition emphasises that sovereign power is not unfettered and that even decisions regarding citizenship have to conform to the principle of non-discrimination.

In February de Varennes and other UN special rapporteurs wrote an “open letter” to the Indian government expressing concerns about the discriminatory aspects of the CAA.

The letter highlights that the “arbitrary” exclusion of Muslims and other minorities from the NRC would “perpetuate discrimination against them and perpetuate a climate of uncertainty, including fears of prolonged statelessness, detention or even deportation”.

The Indian Ministry on External Affairs said that the CAA was an “internal matter” of the country and “no foreign party has any standing on issues pertaining to India’s sovereignty”.

Nearly two million people were excluded from a citizenship list in the northeastern state of Assam where the NRC exercise was concluded last year.

“What the NRC will create is a large group of stateless people, which in itself will run counter to the obligation in international law to prevent statelessness,” Parvathi Menon, a lecturer at the Erik Castren Institute of International Law and Human Rights at the University of Helsinki, says.

Menon says the Indian government has already violated its international obligations by “returning” many Rohingya, claiming that they were “illegal’ immigrants. Menon points to the position in Assam where “illegal immigrants” are now being housed in detention centres.

India’s Hindu nationalist government has deported some Rohingya refugees to Myanmar in violation of the principles of non-refoulement under refugee law. New Delhi, which considers the Muslim refugees a security threat, has vowed to deport them.

According to Indian lawyer Shruti Panday, the NRC places the burden to prove Indian citizenship on the citizen, which could mean that “every citizen becomes a doubtful citizen”. The impact on marginalised groups such as Muslims will be particularly detrimental, she says.

The Indian Constitution recognises the right to equality and the equal application of the law. The 1948 Universal Declaration of Human Rights, which India is a signatory to, specifically prohibits arbitrary deprivation of nationality.

The purpose of Bachelet’s intervention was to highlight the High Commissioner’s concerns that the CAA does not comply with India’s human rights obligations.

The citizenship law, passed last December, sparked nationwide peaceful protests largely led by Muslims, who fear millions of members of the community will be rendered stateless or disenfranchised. Dozens of people, mostly Muslims, have been killed in a police crackdown that has been criticised by rights groups.

The Supreme Court refused to strike down the legislation and gave the government headed by Prime Minister Narendra Modi time to reply to pleas challenging the constitutionality of the CAA.

Surinder Bhagat, a counseller at the Indian Embassy in Doha, the capital of Qatar, said the CAA does not take away the citizenship of any Indian citizen, including Muslims.

“The CAA also does not challenge the standard naturalisation process already permitted in Indian law. The process of obtaining citizenship remains open to people of all faiths and of all countries”, Bhagat told Al Jazeera in an email interview.

But in the third week of March, the Ministry of Home Affairs filed an affidavit in the Supreme Court stating that preparation of the NRC was a “necessary exercise for any sovereign country for mere identification of citizens from non-citizens”.

It emphasised that it is not “taking away” anyone’s citizenship, adding that the CAA “won’t affect the legal, democratic or secular rights of people”.

Pillai says she believes the UN High Commissioner’s intervention is a signal of how seriously the issue of citizenship and potential statelessness is being taken by the international community.

“The impact on regional peace and security can also not be ruled out, especially if there is mass statelessness as a result of the law and policies being pursued”, says Pillai. 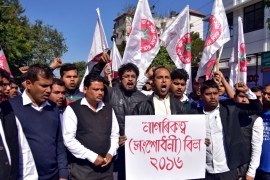 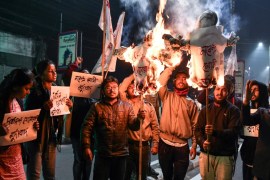 Legislators approve bill that will grant citizenship to non-Muslim immigrants amid protests in northeastern Assam. 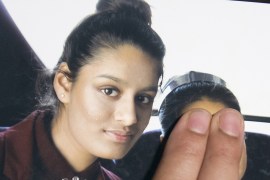