By Tara Kangarlou and Al Jazeera

When the world rang in the New Year on January 1, Iranians were reeling from the country’s worst political unrest in decades. Just weeks before, tens of thousands of people had poured onto the streets across Iranian cities, in an outburst of anger over corruption and hardship as the country’s economy buckled under the weight of US-imposed sanctions.

The protests were met with a deadly crackdown by the security forces, leaving many in Iran believing things could not get any worse.

Then on January 3, the United States assassinated a top Iranian general in Iraq’s capital, Baghdad.

The killing of Qassem Soleimani sent shockwaves through the Middle East and beyond, triggering fears of an all-out war between Washington and Tehran. Iran’s Supreme Leader Ali Hosseini Khamenei pledged “severe revenge” and the country’s elite Islamic Revolutionary Guard Corps (IRGC) responded a few days later by firing a volley of rockets at US targets in Iraq. The retaliatory attacks did not cause any deaths but shortly afterwards, an IRGC operator mistakenly fired two missiles at a Ukrainian passenger jet over the country’s capital.

All 176 people on board died. Most of the victims were Iranian.

The turn of events was dizzying.

Interviewed by telephone, several people in Tehran told Al Jazeera the twists and turns in Iran’s multiple crises have heightened a sense of despair and helplessness.

“Hope is something we don’t have in Iran. It doesn’t exist,” said one young businessman. “We are stuck between two bad options, both here at home and abroad,” said another young man, who lost his nephew in the plane crash. A third added: “I’ve been feeling really tired over the past couple of years and nothing really makes me feel better any more.”

But a few said they continued to hold onto hope for better times in Iran. “Our history is full of these hard and bitter times, but again it also shows that all these hard times will end and God willing, the good days will come,” one said.

The latest escalation began in 2018, when US President Donald Trump pulled Washington out of a landmark accord that offered Tehran relief from global sanctions. In exchange, Iran had pledged to curbs its nuclear programme. But despite Iran’s adherence to the 2015 deal, Trump withdrew from it and reinstated punishing economic measures targeting the country’s banking and oil sectors, saying he wanted to negotiate a new agreement that also addressed Iran’s ballistic missiles programme and its support for regional armed groups.

The sanctions drastically reduced Iran’s oil exports, sending its economy into recession and halving the value of its currency against the US dollar. The cost of living increased dramatically with inflation reaching 52 percent in May last year.

“Life has turned into a struggle,” said a 42-year-old female journalist. “I feel disappointment, insecurity and regret that we face such terrible conditions in a country that is so rich in resources.”

Hamed, who runs a chain of pastry shops in Tehran, said the sanctions have not only hurt Iranians financially but also affected their ability to imagine a better future.

“Here in Iran, young people can’t dream, they can’t have goals for themselves because they know that they can never reach that goal,” he said. “In many other places in the world, people can save, people can work hard and get the result of their work; in Iran, that’s impossible.”

As Iran’s economy crumbled under the US sanctions, Iranian officials slammed Washington’s campaign as “economic terrorism”, saying it was aimed at forcing a change of government in Tehran. Then in May last year, President Hassan Rouhani announced Iran would gradually begin  reducing compliance with the nuclear deal’s limits on uranium enrichment. His government had negotiated the deal and the cleric had won two successive elections on the back of promises to enact democratic reforms and end the country’s isolation from the world.

Tensions escalated further, with a series of attacks on commercial tankers in the Gulf and on oil facilities in Saudi Arabia – incidents Washington blamed Iran for, but which Tehran denied any involvement in. Trump responded at each turn with tighter sanctions, including measures targeting the country’s supreme leader – Khamenei – who has the final say on all state matters.

As the US squeezed Iran on the world stage, Iran’s government found itself under increasing pressure at home. The worsening economy exacerbated public anger at perceived state corruption, resulting in waves of protests. The demonstrations intensified in November last year when the government abruptly raised the price of petrol and imposed a strict fuel rationing system. At least 200,000 people took to the streets across the country, in one of the biggest shows of public anger against Iran’s clerical rulers since its revolution in 1979.

Iranian authorities responded by shutting down the internet and security forces opened live fire at protesters. Amnesty International said more than 300 were killed in the bloody crackdown, but a spokesman for Iran’s judiciary dismissed the numbers as “nothing more than groundless claims”.

Weeks after the protest dispersal, on December 29, a US defence contractor in Iraq was killed in an unclaimed rocket attack that Washington blamed on an Iran-allied militia. The death set off a cycle of violence between the US military and the Shia militia, culminating in Trump’s order to kill Soleimani.

In all of this, it is ordinary Iranians who bear the brunt, said people interviewed by Al Jazeera. They only gave one name or asked to remain anonymous for fear of reprisal.

“Iranian people don’t want this. We don’t want war. We don’t want this regime but Trump is also hurting us … His sanctions are having zero impact on the regime and are only affecting us,” said Nazanin, an Iranian mother of two. “The way Trump killed Soleimani, the way he is choking the Iranian people and humiliating us with his travel bans, sanctions … [it’s] turning us more and more against the US. What Trump is doing is only strengthening the regime.”

Indeed, observers say the US’s pressure campaign and killing of Soleimani have weakened reformist forces who favour integration with the world, and emboldened political factions who advocate against normalising ties with Western countries ahead of parliamentary elections.

Hossein, a businessman who owns one of Iran’s oldest printing presses, agreed with Nazanin.

“Trump thought that by imposing these sanctions, he can put people under pressure and therefore create an environment where they’d rise against the regime, and ultimately topple the government; but he made a huge mistake,” he said. “This pressure will only break people; it’s not going to make them revolt … people have no leadership, people have no unity, and more importantly, they have no power and security.”

There was a palpable sense of anger in Hossein’s voice, as he went on to accuse Iranian leaders of corruption and economic mismanagement. But change must come from within Iran and not by way of Washington, he stressed, whilst also expressing doubt over the Iranian public’s ability to effect that change – mainly because Iran’s main opposition lacked leaders as well as restrictions on free speech and media.

“No one wants Trump to come and put his puppet in Iran. Yes, we are sick and tired of this regime, but no one wants an American stooge here – we need to help ourselves,” he said.

In the pro-government camp, the US moves have further hardened attitudes towards the West.

“History has repeatedly proven that we should not trust the West, especially the US,” said a 28-year-old student who said he had opposed the 2015 nuclear deal “from the beginning”. Western countries “don’t want to see us as a strong and independent nation in the region and they’ll do whatever they can to derail us from this path,” he continued, referring to how the Islamic republic had been under US and Western sanctions for most of its 40-year history.

“Hopefully we’ll get over these hard times by a greater reliance on our own capabilities and we’ll see a strong and prosperous Iran very soon,” the student said, adding the US’s killing of Soleimani had united Iranians and strengthened their resolve to “fight against our enemies”.

The general’s death did provoke a massive outpouring of grief in Iran, with tens of thousands taking to the streets for his funeral. But the public show of unity was brief, with grief turning to anger after the IRGC admitted to shooting down the Ukrainian jetliner.

Mehdi, the young man who lost his nephew in the plane crash said: “The Iranian regime has zero credibility for me, half of my family, and the majority of the Iranian people … Lies, lies, we are constantly being lied to.

“More than being sad for our loss, for losing my nephew, we are angry with the government. Our pain has evolved into fury … We are only thinking of how we can rescue ourselves from them.”

Amid the turmoil, all interviewees said they were bracing for a year of misery and uncertainty. And some, unable to see a clear path out of Iran’s multiple crises, said they are turning their attention away from geopolitics to living honest and simple lives.

“Currently I’m doing all that I can to provide the best that I can in my own field of work, to stay away from corruption, to give hope to others about the future,” said a 47-year-old male journalist in Tehran.

The veteran reporter said he was “bitter, but still hopeful” because of the resilience of the Iranian people.

“We can rebuild Iran … Be patient, the dawn is close by,” he said. 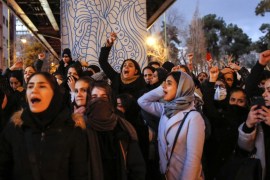 Mass disqualification of candidates add to discontent in Iran

Disqualification of candidates and dissatisfaction with reformists could reduce turnout in Iran’s parliamentary vote. 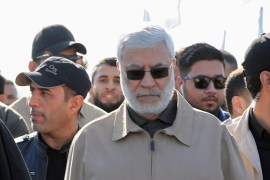