Lebanese riot police on Saturday scuffled with student protesters angered by a decision from top universities to adopt a new dollar exchange rate to price tuition – equivalent to a major fee hike.

Near the entrance of the American University of Beirut (AUB) in the city’s Hamra district, security forces fired tear gas to disperse protesters who tried to approach the main gate.

Students responded by throwing water bottles and other objects at riot police blocking their path.

It was not immediately clear if there were any injuries.

An occupation of Hamra is underway with thousands of students from both private universities and the public LU gathering to protest the dollarization of tuitions and the broader commodification of education.

The united student front isnt backing down from the regime & its allies pic.twitter.com/VIm5a1el1c

The protest came in response to a decision by AUB and the Lebanese American University (LAU), another top private institution, to price tuition based on an exchange rate of 3,900 Lebanese pounds to the dollar.

The move has prompted fears that other universities could follow suit, potentially leading to an exodus of students from private schools while public universities remain underfunded and overstretched.

At the rally in Hamra, dubbed a “student day of rage”, hundreds of students were joined by older protesters who wanted to show their support for the students’ demands, according to local media reports.

“Students day of rage” in #Lebanon as universities raise tuition almost 160 percent amid a huge economic crisis in the country. The riot police is here using tear gas on the students and blockading the main entrance of AUB. pic.twitter.com/Lt18L2Ylfg

They chanted anti-government slogans and called for affordable education in a country mired in its worst economic crisis since the 1975-1990 civil war.

Some chants described university presidents as “thieves”, accusing them of being government “accomplices against the people”, while others referred to their grievances as “rights, not demands”.

In the evening, some torched dumpsters to block the street and vandalised banks, before security forces pushed them out.

Reports, which Al Jazeera was attempting to verify, said at least one student being arrested.

Over the past year, the Lebanese pound has lost up to 80 percent of its value on the black market, where on Saturday the dollar was selling for at least 8,200 pounds.

Universities have struggled to adapt to the de facto devaluation as prices nationwide soared.

Commercial banks halted dollar transactions and restricted withdrawals of Lebanese pounds, in moves that have starved many of their savings.

According to the United Nations, more than half of Lebanon’s population is now living in poverty.

The country’s deep financial crisis is exacerbated by the COVID pandemic and aftermath of the massive Beirut port blast in August, which wrecked large parts of the city, killing 200 and injuring more than 6,000 people. 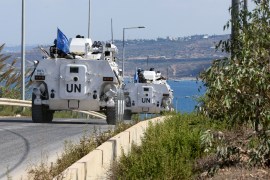 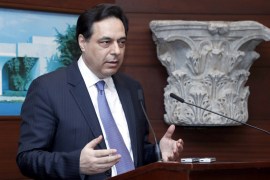 Hassan Diab says entrenched interests stymied reform efforts adding that he does not want to stay as caretaker leader. 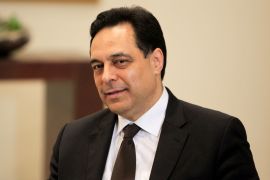