An audio message from a man identifying himself as the leader of Nigeria’s Boko Haram has claimed that the armed group was responsible for the abduction of hundreds of students from an all-boys school in the northwestern state of Katsina.

“I am Abubakar Shekau and our brothers are behind the kidnapping in Katsina,” said the man in Tuesday’s voice message.

Boko Haram and its splinter faction, the Islamic State in West Africa Province (ISWAP), have for years waged a violent armed campaign in the northeast of the country and neighbouring Cameroon, Chad and Niger. In 2014, Boko Haram, whose name means “Western education is forbidden” in the local Hausa language, abducted hundreds of schoolgirls in the town of Chibok.

The man in the audio message offered no proof for the claim. No video footage was released of the missing boys. There was no immediate comment by Nigerian authorities.

Late on Monday, the governor of Katsina state, Aminu Bello Masari, said the abductors “have made contacts with the government”.

“Talks are ongoing to ensure their safety and return to their respective families,” he said on Twitter, without identifying the kidnappers. 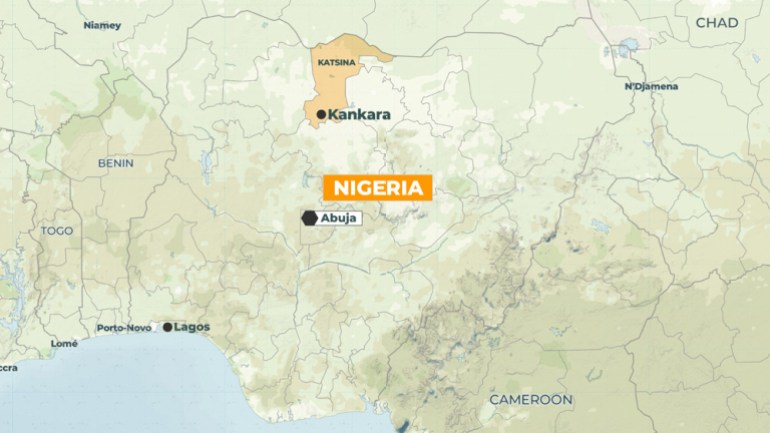 A joint rescue operation was launched on Saturday by Nigeria’s police, air force and army, according to the government. The army said on Monday it had located the hideout of the men, and that a military operation was under way.

On Sunday, parents and family members gathered at the school, issuing a plea to authorities to bring the missing boys to safety.

“If it’s not government that will help us, we have no power to rescue our children,” Murja Mohammed, whose son was taken, told the Reuters news agency.

The attack was initially blamed on armed groups locally known as “bandits”, who are active in the unstable region where kidnappings for ransom are common.

More than 100 gunmen on motorcycles stormed the rural school north of Kankara town, forcing students to flee and hide in the surrounding bush.

A number of boys were able to escape, but many were captured, split into groups and taken away, residents told AFP news agency.

Al Jazeera’s Ahmed Idris, reporting from Nigeria’s capital, Abuja, said the fact that Boko Haram’s claim came days after the abduction led some to suggest that that kidnapping could have been conducted by others who then proceeded to sell the schoolchildren to the armed group.

Sulaiman Aledeh, a journalist and political analyst in Lagos, told Al Jazeera the fear was that the schoolboys are going to be “radicalised” by Boko Haram, which is not known to kidnap for ransom, and increase the number of the armed group’s members.

“The worry now is the longer that these young boys are in the hands of Boko Haram, the slimmer the chances of getting them rescued,” he said.

This is the first of such massive kidnappings in the northwest of Nigeria. Tuesday’s claim of responsibility also marks a major turning point in the advance of armed groups in northwest Nigeria.

The northwest region had been overrun by armed bandits who engaged mostly in attacks on farming communities and cattle rustling. The motorcycle-riding criminal gangs operating in the region also kidnapped individuals for ransom but nothing close to last week’s abduction.

Fears that Boko Haram and ISWAP were making inroads into the northwest have been simmering for some time.

“Since 2014, Shekau himself has been trying to get the bandits in the northwest to become loyal to him, and there is growing evidence from the past year that more and more bandits have claimed their loyalty to him,” said Jacob Zenn, analyst at the Washington-based research group The Jamestown Foundation.

“Nigerian intelligence sources have been observing that there are logistic networks, financing networks between Shekau and the northwest,” Zenn told AFP.

Katsina borders Niger, and a major concern has been if Boko Haram or ISWAP linked up with armed groups in the conflict-hit Sahel.

“It’s increasingly looking like the jihadist theatre in Mali and Niger and northwest Nigeria are really beginning to blend together as one,” said Zenn.

The International Crisis Group issued a report in May, saying porous borders could connect “Islamic insurgencies in the central Sahel with the decade-old insurgency in the Lake Chad region.”

The #BringBackOurBoys hashtag has been trending on social media since the weekend – a reference to a similar hashtag used after the girls’ 2014 abduction.

Angry residents heckled Katsina’s governor when he visited the area on Saturday and protesters greeted a delegation led by Defence Minister Bashir Salihi-Magashi on Sunday.

The kidnappings occurred in the home state of President Muhammadu Buhari, who was visiting the area when the attack happened. Buhari, who condemned the attack and ordered security stepped up in schools, with those in Katsina state closed.

Buhari has made the fight against Boko Haram a priority, but the security situation in northern Nigeria has deteriorated since his 2015 election.

Aledeh said the abductions has led many to ask questions if “Buhari is truly in charge”, with many expressing anger that the president has not visited the families of the schoolboys.

“If he was in Abuja, nobody would have expected him to pay a visit. But he was home and nobody has seen him speak to any of the parents or pay a visit to Kankara. Instead, we have seen a viral video of him visiting his ranch, which caused a lot of outrage in Nigeria.”