The United States plans to sell four armed MQ-9 Reaper drones to Taiwan, the US Department of State announced on Tuesday, in a sale that is likely to further anger China, which claims the self-ruled island as its own.

The $600m deal would be the first such sale since the administration of US President Donald Trump loosened US policy on the export of sophisticated and closely guarded drone technology.

The sale supports Taiwan’s “continuing efforts to modernize its armed forces and to maintain a credible defensive capability”, the State Department said in a statement. It will also help maintain political stability and the military balance in the region, it added.

The State Department’s formal notification gives the US Congress 30 days to object, but that is unlikely given the broad bipartisan support in Washington for the defence of Taiwan.

The drones deal, first reported in mid-October, is the latest in a series of sales of military equipment and weapons sales to Taiwan worth about $4.2bn, which have included Harpoon anti-ship missiles, air-launched SLAM-ER cruise missiles, and mobile light rocket launchers.

“China strongly urges the US side to immediately withdraw plans of arms sales to Taiwan, cease US-Taiwan military contacts and stop selling weapons to the island,” China’s Ministry of National Defense said on October 27 after those sales were announced.

The latest sale covers four drones, ground stations, and associated surveillance and communications equipment, but not the bombs or missiles usually associated with it.

China has stepped up activities around Taiwan this year, following the re-election, by a landslide, of President Tsai Ing-wen and visits by high-ranking officials from both the US and Europe.

According to China’s state-owned Global Times, the Chinese air force sent warplanes to the Taiwan Strait on at least 25 days out of the total 31 days in October, setting a new record for frequency this year.

Beijing has not ruled out the use of force to reunify Taiwan with the mainland.

While Taiwan has for decades fallen back on US security guarantees, Washington has urged it to strengthen its own military capabilities.

Tsai said last month that the island’s government was modernising its military and improving its capacity for asymmetric warfare to “deal with military expansion and provocation from the other side of the Taiwan Strait”.

Asymmetric warfare is designed to make any Chinese attack difficult and costly, for example with smart mines and portable missiles. 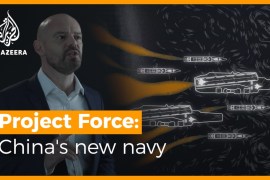 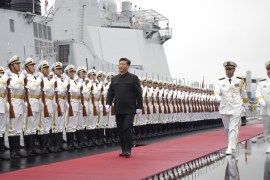