At least 22 people were killed and 22 other wounded when gunmen stormed Kabul University in a brutal, hours-long assault that saw students left in pools of blood in their classrooms.

The attack in Afghanistan’s capital on Monday, claimed by the the Islamic State of Iraq and Levant (ISIL, ISIS) group, came as violence surged across the country.

It was also the second time in less than two weeks that an educational institution was targeted in the capital.

On Tuesday, the country’s first Vice President Amrullah Saleh pointed finger of blame on the Taliban, which rejected his claims.

Saleh told local media that there are many evidences to prove his claim, but Taliban spokesman Zabihullah Mujahid said it was an attempt by Saleh to defame the armed group, which signed an agreement with the US in February.

Survivors described horrific scenes following the incident that unfolded around 11am (0530 GMT) when a suicide bomber blew himself up inside the campus. Two gunmen then started shooting, officials said, sending hundreds of students fleeing and scrambling over perimeter walls.

Fraidoon Ahmadi, a 23-year-old student, told AFP news agency he was in class when gunfire broke out.

“We were very scared and we thought it could be the last day of our lives… boys and girls were shouting, praying and crying for help,” Ahmadi said, adding that he and other students were besieged for more than two hours before being rescued.

Hamid Obaidi, spokesman for the Ministry of Higher Education, told AFP the attack started when government officials were arriving for the opening of an Iranian book fair organised on campus.

This photo reminds me of the Haqqani attack on American University in 2016 when I & hundreds of other students run for our lives through the walls!

what has changed since? pic.twitter.com/jF6YoKSkA2

President Ashraf Ghani called the attack “despicable act of terror” and announced a national day of mourning to honour the victims.

Witnesses said hundreds of people were sent fleeing and scrambling over walls of the campus when the attack took place.

“Sadly 19 people have been killed and 22 more wounded,” Interior Ministry spokesperson Tariq Arian told AFP. “Three attackers were involved. One of them blew up his explosives at the beginning, two were brought down by the security forces.”

Kabul police spokesman Ferdaws Faramerz told AFP most of those killed were students.

Afghan media reported the book exhibition was being attended by several dignitaries at the time of the shooting.

Iran’s semi-official ISNA news agency reported on Sunday that Iranian Ambassador Bahador Aminian and cultural attache Mojtaba Noroozi were scheduled to inaugurate the fair, which was to host some 40 Iranian publishers.

“Security forces had to protect thousands of students and staff members while also trying to apprehend the gunmen.”

Also speaking from Kabul, Mushtaq Rahim, a conflict, peace and security specialist, told Al Jazeera the incident is likely to negatively affect the peace talks which are already facing challenges.

“People start questioning the whole process even at a time when they [negotiators] are closing in on a potential peace deal,” he said.

“Seeing these heinous attacks on civilians and civilian installations creates a negative mood among the public and the government will also have to take on a harsh approach to manage people’s expectations.”

Several education centres have been attacked over the years by armed groups, including ISIL.

In 2016, 13 people were killed when gunmen attacked the American University in Kabul.

At least 24 students were killed last month when ISIL fighters carried out a suicide bombing at an education centre in the capital’s Shia-majority neighbourhood of Dashte Barchi.

Violence has plagued Afghanistan while government and Taliban negotiators have been meeting in Qatar to try to broker a peace deal that would allow the United States to withdraw its troops and end its longest war. 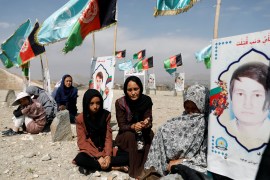 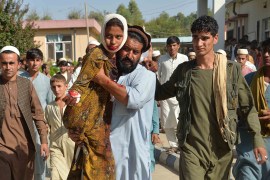 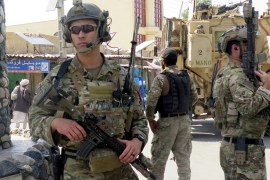