More than 20 civilians have been killed in an attack on a village in the eastern Democratic Republic of the Congo (DRC), according to local authorities.

Authorities on Saturday blamed the Allied Democratic Forces (ADF) rebel group for the attack the previous evening, saying its fighters first attacked a rival group of Congolese militia members before killing inhabitants in the village of Lisasa.

Local administrator Donat Kibwana, from the Beni territory in North Kivu province, put the “preliminary death toll” at 21. The figure was confirmed by the head of the Buliki area, where Lisasa is located, according to the AFP news agency. A local NGO called Cepadho said in a statement that of the 21 killed, 15 were women.

All three sources were quoted as saying by AFP that more people were kidnapped. A health centre was also ransacked, while homes were set on fire and a Catholic church desecrated.

“Everything happened yesterday between 8pm and midnight – the armed men carried out a raid,” local leader Kalunga Messo told the Reuters news agency on Saturday by phone. “They killed our brothers without mercy.”

The ADF, which originated in the 1990s in western Uganda with the aim of creating an Islamic state, is one of dozens of armed groups that plague the eastern provinces of the vast DRC.

About six years ago, the ADF started to attack villages, killing people using machetes and guns and abducting hundreds of others.

The ADF has never claimed responsibility for attacks.

Several attacks attributed to the ADF have also been claimed by ISIL (ISIS), although United Nations experts have found no evidence of a direct connection between the two groups.

A year ago, the Congolese army launched a large-scale campaign against the ADF.

In response, the group abandoned its bases, split into smaller, more mobile groups and retaliated against civilians.

On October 21, hundreds of prisoners escaped from a jail in Beni following an attack by armed men. Police blamed the ADF while ISIL took credit for it.

The latest attack comes only days after the ADF killed 19 people in the remote village of Baeti on Wednesday night. The village’s church was torched, as were about 40 homes.

“During the month of October, the ADF has targeted Christian churches. This is not insignificant,” Cepadho head Omar Kavota told AFP.

ISIL on Friday claimed responsibility for the Baeti attack. 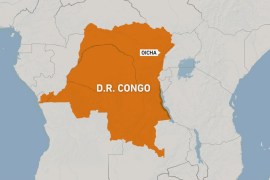 More than a dozen civilians killed in eastern DRC attack

Suspected attack by ADF is the latest since the army launched a large-scale operation against the group last year. 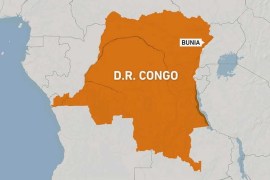