The unveiling of US President Donald Trump‘s plan for resolving the Israeli-Palestinian conflict comes at a crucial time for Israeli Prime Minister Benjamin Netanyahu, who is facing trial on corruption charges and is also running for re-election.

Trump on Monday held separate meetings with the prime minister and his main rival, Benny Gantz, leader of the centrist Blue and White alliance, ahead of Tuesday’s scheduled meeting with Netanyahu when the Middle East plan is expected to be revealed.

Palestinian leaders have already rejected the plan amid concerns that it would not address Israel’s 52-year occupation of the West Bank and East Jerusalem, raising questions about the timing of the announcement. Three years in the making, Trump’s plan was set to be presented as his impeachment trial continues in the US Senate and as Israel‘s parliament had planned to hold a debate on Netanyahu’s request for immunity from prosecution.

The summit appears to be a welcome distraction for both leaders, while some analysts have questioned whether the timing could provide a boost to Netanyahu ahead of the Israeli parliamentary election set for March 2.

“The timing of the release is politically expedient for both Trump and Netanyahu given their mutual legal and political troubles and impending elections, all of which happen to be coelescing around the same time,” Omar Rahman, visiting fellow at the Brookings Institution’s Doha Centre, told Al Jazeera.

Some critics in Israel have noted that the timing of the announcement could be seen as an attempt to distract from Netanyahu’s immunity proceedings.

Dahlia Scheindlin, a public opinion expert and political analyst, told Al Jazeera that the upcoming plan had “short-term distracted people from that”.

Netanyahu was indicted on counts of fraud, breach of trust and bribery in November in three separate cases. On Tuesday, the Knesset was set to discuss whether it will establish a committee to discuss Netanyahu’s immunity request regarding the charges.

But Netanyahu withdrew his request for immunity from prosecution, issuing a statement on Facebook on Tuesday in which he said the proceedings in parliament would have been a “circus” and he did not want to participate in this “dirty game”.

By withdrawing the request for immunity, Netanyahu opened the way for a trial on the corruption charges to begin. Israel’s attorney general filed the indictment against the prime minister at a Jerusalem court hours after the announcement.

Netanyahu is also hoping to shift the media spotlight towards his diplomacy in Washington, which is “certainly playing to his strengths,” Scheindlin said.

Scheindlin noted that pre-election polls in Israel have not moved much in the past year, with Netanyahu and Gantz in a dead heat, despite Israel holding two inconclusive elections and the charges being brought against Netanyahu.

While several commentators had suggested that Monday’s meetings with Trump posed a political risk for Gantz, Scheindlin said that by meeting Trump, Gantz raised himself to “Netanyahu’s level”.

“In a way, Netanyahu took a risk having put Gantz in a position where he can look like a statesman involved in high-level diplomacy, which puts him on the level of Netanyahu,” Scheindlin said.

Israeli journalist Meron Rapoport told Al Jazeera that Netanyahu’s main goal was to shift the focus of the election campaign from his legal problems to Trump’s plan.

Reports in Israeli media have suggested that the plan could include the annexation of parts of the occupied West Bank, including the Jordan Valley, and the imposition of Israeli sovereignty on a number of illegal settlements there.

Rapoport said the key issue related to the timing of the announcement was whether Netanyahu would try to use the plan to push for annexation of some parts of the Jordan Valley in the weeks before the Israeli election while a “sympathising president” is in the White House.

“Sometimes history plays games and this plan is portrayed as the golden opportunity of the settlers and right-wing to annex large parts of the West Bank and it puts the idea of a Palestinian state off the table,” Rapoport said, noting that Trump has been portrayed as sympathetic to the idea of annexation.

Competing for votes among the right-wing Israeli electorate, Gantz promised on January 21 to annex the Jordan Valley if he wins the election, adding that he would so “in coordination with the international community”.

In a Likud campaign speech the same night, Netanyahu said he would apply Israeli sovereignty to the Jordan Valley and all West Bank settlements “without exception”.

“Why wait until after the election if we can apply sovereignty over the Jordan Valley right now with broad consensus in the Knesset?” he said.

Despite the annexationist rhetoric on the campaign trail, Rapoport said he was not certain Israel would move to formally annex the territory.

“[It’s] already considered to a great extent part of Israel. Most of the Israeli public doesn’t see anything new here,” Rapoport said.

“Annexation seems almost a natural thing because in the last 25 years, the settlements have become de facto part of Israel. The green line was erased in many ways, at least in the consciousness of Israelis.” 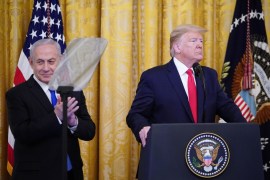 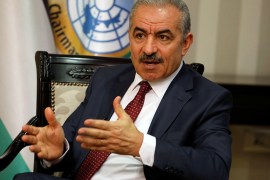 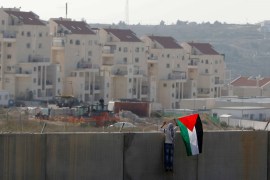 More than 600,000 Israelis live in illegal settlements in the West Bank and occupied East Jerusalem. 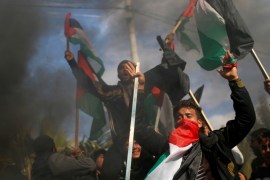 Protests in Gaza ahead of Trump’s Middle East plan release

Raising a banner that read ‘Palestine is not for sale’, demonstrators burned photos of Trump and Netanyahu.