The death toll from the devastating Hurricane Dorian has risen to at least 43 across the Bahamas, but authorities warn they expect a “staggering” number of casualties as hundreds of people remain missing.

The most powerful hurricane on record to hit the Bahamas swept through the islands earlier this week, levelling neighbourhoods, destroying livelihoods and leaving thousands homeless.

Confirming the new toll of 43, Prime Minister Hubert Minnis said on Friday that 35 were killed on the worst-hit Abaco island and eight on Grand Bahama island.

“The loss of life we are experiencing is catastrophic and devastating,” he said in a statement quoted by The Tribune newspaper.

With many missing, “this number is expected to grow significantly,” his spokeswoman Erica Wells Cox told NBC News.

On the eventual death toll, Health Minister Duane Sands earlier said that “the number will be staggering”.

“Literally hundreds, up to thousands, of people are still missing,” Joy Jibrilu, the director general of the Bahamian tourism and aviation ministry, told CNN.

Meanwhile, hundreds of people fled Great Abaco by boat and plane and thousands more lined up to get on a cruise ship leaving neighbouring Grand Bahama to escape the catastrophic aftermath of Hurricane Dorian.

Dazed evacuees, some with nothing but the clothes on their backs and plastic shopping bags, sat at a gymnasium-turned-shelter in the capital, Nassau, which was spared the wrath of the hurricane.

“Nobody can help anybody in Abaco, there’s no place safe, everything is destroyed,” said Firstina Swain, 75, who said she lost her home. “The people of Abaco need to get out, there are too many dead bodies, and I don’t think they finished finding them.”

Others awaited news of loved ones such as Diane Forbes, who had not heard from her two sons since Tuesday and was searching for them among some 200 evacuees sheltered at the gymnasium on Friday night.

“They said they were hungry and the scent of the bodies, the dead, was really getting to them … I don’t know if my son is alive or not,” she said of one of her children, who had been in Marsh Harbour on Abaco with his girlfriend and her mother.

A boat with 250 evacuees left battered Abaco and arrived in Nassau. Another boat with hundreds on board was on its way, National Voice of the Bahamas radio reported.

Four survivors told Reuters news agency on Thursday they had been charged $75 for a seat on a Bahamasair flight from Abaco to Nassau. “I thought a relief flight would be free,” said Anthony Thompson, 27, who said he paid the fare for himself, his wife and his sister. “I thought wrong.”

A Bahamasair official, who requested anonymity, told Reuters the airline was collecting its customers whose flights had been cancelled during the hurricane. To the extent extra seats were available, it was offering to ferry others off Abaco “at cost,” the official said.

According to United Nations relief officials, more than 70,000 people – virtually the entire population of Grand Bahama and Abaco – were in need of assistance, and many were becoming frustrated with the speed of relief and evacuation efforts.

“There’s no gas station, no food stores, my job is gone,” said Melanie Lowe of Marsh Harbour, whose house was partially destroyed and had packed into a two-bedroom apartment with 16 people before arriving in Nassau.

The US Coastguard and private organisations have been evacuating residents of Abaco and other islands to Nassau.

The multinational relief effort, which also includes Britain’s Royal Navy and several non-governmental groups, has been hampered by flood damage to airport runways, destroyed piers and docks and downed communications.

Dorian edges closer to US

Meanwhile, Dorian made landfall in the US as a Category 1 hurricane packing winds of nearly 150 kilometres per hour.

The Miami-based National Hurricane Center (NHC) said the storm made landfall at Cape Hatteras on North Carolina’s Outer Banks, the finger-like barrier islands off the coast.

Flooding was reported in the town of Ocracoke to the southwest of Cape Hatteras.

Thousands of coastal residents of US states from Florida to Virginia had been fearing the worst but the East Coast largely escaped unscathed.

Some flooding occurred in the historic city of Charleston, South Carolina, and tens of thousands of residents lost electricity but no major damage was reported.

The storm was moving in a northeast direction up the Atlantic coast at 41km/h, with hurricane-force winds expected in parts of the Canadian province of Nova Scotia later on Saturday after Dorian’s centre passes to the southeast of New England. 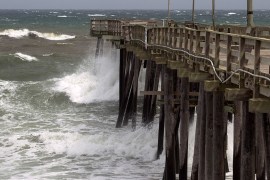 Storm brings floodwaters and high winds to US eastern coastline after reducing parts of the Bahamas to rubble. 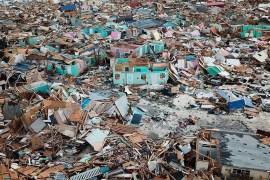 Death and destruction stalk Bahamas in wake of Hurricane Dorian

Relief effort gathers pace with property damage estimated at $7bn, thousands in need of help, and at least 30 dead.

Residents survey damage after the most damaging storm ever to hit the island nation. 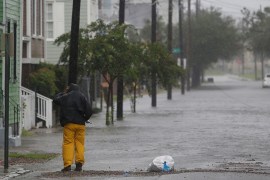 Dorian edges closer to US, bringing high winds and flooding