The Trump administration said on Thursday it plans to allow only 18,000 refugees to be resettled in the United States in the 2020 fiscal year, the lowest number in the history of the modern refugee programme, blaming the decision on a backlog in asylum claims.

At the same time, in a major shift for a federally directed programme, President Donald Trump issued an executive order saying his administration would seek the approval of state and local governments before resettling refugees in their communities.

The State Department said the cut was necessary to clear a backlog of claims, mostly filed by people from Central America crossing into the US from Mexico.

“The current burdens on the U.S. immigration system must be alleviated before it is again possible to resettle large number of refugees,” the State Department said in a statement.

Trump has put cutting immigration at the heart of his presidency, and the latest plans were swiftly condemned by human rights advocates as an affront to the country’s humanitarian commitments.

Speaking from Washington, Al Jazeera’s Patty Culhane said that while the president had to consult Congress on the plans, the law does appear to give him “broad authority” on the issue.

Culhane added that it was about the president “solidifying his base” with the election due in 2020.

“One of the key issues from his first campaign to his presidency has been that he is tough on immigration.”

One of Trump’s first acts after his inauguration in January 2017 was to issue an order capping the maximum number of refugees that year at 50,000, less than half the number former President Barack Obama had set a few months earlier. He also imposed a controversial travel ban on people from several Muslim-majority countries.

Even then, only 22,491 refugees were actually admitted for resettlement in 2018, according to government data. The Department of State acknowledged that more stringent screening and vetting procedures were behind the low number.

Together, the reduction in resettlement numbers and the executive order “will all but ensure that people in need of safety will be left in dangerous conditions and separated from their families,” said Betsy Fisher, the director of strategy at the nonprofit group International Refugee Assistance Project.

Of the proposed 18,000 spots, 4,000 would be reserved for Iraqis, 5,000 for those fleeing religious persecution and 1,500 for people from Honduras, Guatemala and El Salvador.

Tens of thousands of refugees are in the pipeline for arrival to the US, many with applications far along in the approval and vetting process.

But a drastic reduction in the overall numbers, as well as the allocations for particular groups, could mean many of them will miss the chance to start new lives in the US in the 2020 fiscal year.

The senior administration official said refugee arrivals, which had been temporarily suspended pending the release of the new resettlement numbers, should resume on October 22.

While a short suspension is typical, the weeks-long halt has left many refugees who had already booked their flights stranded.

Amid reports earlier this month that revealed the Trump administration was considering the refugee cuts, several 2020 Democratic presidential hopefuls said such a move would be “immoral”.

A group of retired US military generals and officers had also sent a letter to the Trump administration, expressing their “grave concerns” about reports of further cuts to the refugee programme.

The reduction comes at a time when there are nearly 71 million displaced people around the world, many of them refugees who have been waiting years in limbo for a chance at resettlement.

Congress could push for a higher total during consultation on the proposal, while refugee groups were also likely to go to the courts to challenge any decision, Culhane said.

He can’t prevent them from moving to where they want to go. This is just foolish and mean spirited

The president’s executive order also potentially limits the places where those that are accepted can be resettled.

In  his order, Trump said refugees should only be placed where state and local governments agree to receive them, to ensure “that refugees are resettled in communities that are eager and equipped to support their successful integration into American society and the labor force.”

Mark Hetfield, chief executive of Jewish non-profit refugee assistance organisation HIAS said the executive order was an attempt by Trump to “allow governors and mayors to imitate his own refugee ban, state by state and town by town.”

He said while Trump could impose limits on where refugees were placed, “he can’t prevent them from moving to where they want to go. This is just foolish and mean spirited.” 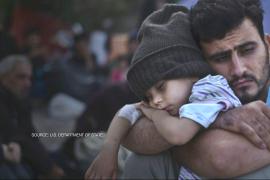 Senior officials in the Trump administration have briefed Congress on the president’s plans to cut the number of refugees allowed into the US. 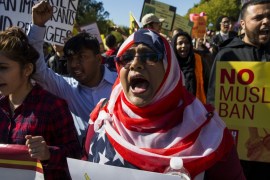 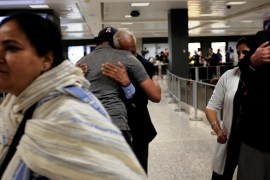 A watered-down version of the controversial executive order against six Muslim-majority countries has come into effect.