A huge vessel, the world’s only floating nuclear power plant, has left its dock in the Russian port of Murmansk and is on its way to the arctic town of Pevek despite opposition from environmental groups.

The 144 metres long and 30 metres wide vessel, named the Akademik Lomonosov after the 18th-century Russian scientist, houses two nuclear reactors. It will be towed 6,000 kilometres to the remote Siberian region of Chukotka, about 86 kilometres from the US state of Alaska, after leaving the port on Friday.

Once docked, the 21,000-tonne barge will replace a coal-burning power plant and an ageing land-based nuclear plant and will supply 50,000 people in the area with electricity, according to Russia’s state nuclear corporation Rosatom.

The floating vessel will be the northernmost nuclear plant in the world, and will also power the extraction of natural resources in the region when it starts operations next year.

Russia’s state corporation has described the vessel as a “pilot project”, with plans for widespread development and use of similar designs.

Russia, the United States and several other countries have long used nuclear reactors to power sea vessels, including ice breakers and submarines, but the Russian vessel is set to be the only floating nuclear power plant of its kind when it begins operations next year.

Scientists in China and researchers at the US-based Massachusetts Institute of Technology (MIT) are also working on sea-based nuclear power plants, and France has explored the possibility.

The environmental group Greenpeace has called the plan “Chernobyl on Ice”, referring to the 1986 nuclear power plant meltdown, which released large levels of radiation into the atmosphere, forced thousands to flee their homes and sparked long-term fears of health and environmental repercussions.

An explosion on August 8 in Archangelsk has further heightened concerns of Russian nuclear negligence, with the government initially denying, and then admitting that radioactive material had been involved in the blast, which killed five scientists and caused radiation levels to spike in a nearby town.

The launch is part of a wider ambition of Russian President Vladimir Putin to develop the Northern Arctic region. That desire has become more realistic in recent years with global warming and melting ice caps making some areas more accessible.

What is the Akademik Lomonosov?

Rosatom said the Akademik Lomonosov is part of a larger plan to provide energy to remote regions in Russia and around the world.

It said that floating nuclear units could be particularly beneficial to island nations and can be used to power desalination plants for countries with a shortage of fresh water.

The company has also said that, because many remote areas rely on coal-burning plants, the portable nuclear plants will help to reduce emissions of carbon dioxide, a greenhouse gas that contributes to climate change.

On board the Akademik Lomonosov are two KLT-40C reactor systems, each with a capacity of 35 megawatts. It has an overall “life cycle” of 40 years, which may be extended to 50 years, according to Rosatom.

The corporation’s Director General Alexei Likhachev, in May, described the vessel as an “unparalleled piece of engineering”.

Rostom is currently working on a smaller, more powerful version of the floating plant, which it plans to roll out as part of the initiative’s second generation.

Greenpeace has continually criticised the decade-long project, accusing the Russian corporation of not being transparent and saying that any problem with the reactor in the remote region would be difficult to properly contain before it turned catastrophic.

Rosatom has said the risks will be minimised, with spent fuel taken to special storage facilities in mainland Russia.

In 2017, Greenpeace protested at the St Petersburg Baltic shipyard, where the Akademik Lomonosov was being constructed and where tests were meant to take place. Those tests were moved to the smaller city of Murmansk in May, where the floating plant was loaded with nuclear fuel before its final departure.

In May, Jan Haverkamp, the nuclear expert with Greenpeace Central and Eastern Europe, said in a statement that installing the floating power plant in “the harsh environment of the Russian Arctic will pose a constant threat to people of the North and the pristine Arctic nature”.

That month, Greenpeace, along with two Russian environmental organisations, sent a letter to Rosatom and other authorities that called for a peer-review of the vessel by nuclear regulators from other Arctic countries, as well as an Arctic Environmental Impact Assessment (EIA).

In June, the Russian regulator Rostechnadzor issued a 10-year licence for the Akademik Lomonosov.

Critics have pointed to past incidents involving nuclear sea vessels, including the sinking of the gargantuan Kursk Submarine in 2000 and the leaking of radiation by a Russian icebreaker off the coast of Siberia in 2011.

Several fires onboard nuclear-powered vessels in recent years, including one in July that killed 14 crew members on the Losharik deep-sea vessel, have also stoked concerns.

“The incident-ridden history of Russian nuclear icebreakers and submarines shows the need for strict, independent oversight with international peer review. This must start now, before the reactors are loaded, and span the plant’s entire risky operation – including transport, decommissioning and waste management,” said Haverkamp.

Michael Golay, a professor in the Nuclear Science and Engineering Department at the Massachusetts Institute of Technology (MIT), told Al Jazeera there is a great potential for innovation when it comes to nuclear plants based on water.

In some instances, the right designs could make these power plants safer than those on land, he said, noting that recent nuclear catastrophes had been caused not by the nuclear chain reaction, but by failures in cooling the nuclear reactor afterwards.

“What we’ve seen is, we can control the chain reaction pretty reliably,” Golay said. “But the problem of reactor cooling has been important in the Fukushima accident and the Three Mile Island accident.”

An innovative design that uses gravity and ocean water could make that cooling more foolproof, he added.

Golay said that the Akademik Lomonosov appears to use technology more akin to that used in land-based nuclear plants or nuclear-powered sea vessels.

This means its safety will rely more on the hardware, culture, training and execution by the crew.

The plant is also very small relative to commercial land-based nuclear plants. It would have to be scaled up to seriously affect the way nuclear power is delivered around the world.

“The [Akademik Lomonosov] is the first step in a long journey,” Golay said. “But if it goes successfully, it could open the way to other possibilities.” 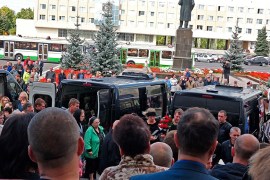 Experts link the explosion to the Burevestnik nuclear-powered cruise missile touted by President Putin in March 2018.