Israel has decided to bar United States congresswomen Rashida Tlaib and Ilhan Omar from entering the country ahead of a planned trip to the occupied West Bank, in a move that came shortly after US President Donald Trump said it would “show great weakness” to allow them in.

The decision on Thursday was swiftly denounced by Miftah, the Palestinian group cosponsoring the planned trip this weekend, as “an affront to the American people and their representatives” and “an assault on the Palestinian people’s right to reach out to decision-makers and other actors from around the world.”

Israeli Minister of the Interior Aryeh Deri issued a statement saying that after consultations with Prime Minister Benjamin Netanyahu and other senior Israeli officials, he decided not to allow Tlaib and Omar to enter because of “their boycott activities against Israel”.

Under Israeli law, backers of the BDS movement, a pro-Palestinian global effort to pressure Israel through boycotts, sanctions and divestment, can be denied entry to Israel.

Tlaib and Omar have voiced support for the BDS movement, which seeks to use non-violent means to pressure Israel to end its occupation of the Palestinian territories, dismantle the separation wall, ensure equality for its Palestinian citizens and implement the right of Palestinian refugees to return to their lands.

Earlier on Thursday, Trump had said in a tweet: “It would show great weakness if Israel allowed Rep Omar and Rep Tlaib to visit. They hate Israel and all Jewish people, and there is nothing that can be said or done to change their minds.”

The US president last month had again targeted Omar, Tlaib and two other Democratic congresswomen of colour with racist attacks, saying the four politicians should “go back” to where they came from.

Tlaib, 43, who was born in the United States, draws her roots to the Palestinian village of Beit Ur al-Fauqa in the occupied West Bank. Her grandmother and extended family live in the village.

Omar, 37, who immigrated to the US from Somalia as a child, represents Minnesota’s fifth congressional district.

The politicians, the first two Muslim women elected to Congress and members of the Democratic party’s progressive wing, have repeatedly said their criticisms of Israel’s government are based on policy differences and are not directed at Jewish people.

‘Clear case of discrimination and hostility’

No date had been formally announced for their trip but reports suggested they planned to visit this weekend.

“Like all prolific human rights abusers, Israel wants to impose a blackout on the reality in occupied Palestine and prevent Congresswomen Tlaib, Omar from having direct contact with the Palestinian people, who are subject to Israel’s cruel regime of colonisation, oppression, and land grab,” Miftah said.

“This ban is a clear case of discrimination and hostility based on political views and ethnic background, deserving of moral indignation and unequivocal condemnation in Palestine and the United States.”

The move to bar the congresswomen from visiting the close US ally appeared to be unprecedented and marked a deep foray by Israel into America’s bitterly polarised politics.

It also marked a sharp escalation of Israel’s campaign against the international boycott movement.

Mustafa Barghouti, general secretary of the Palestinian National Initiative, said Israel’s behaviour shows that “they are afraid that these two congresswomen will expose to the world the horrible violations of human rights that are conducted against the Palestinian people.”

Reporting from West Jerusalem, Al Jazeera’s Harry Fawcett referenced Trump’s tweet as he said that US pressure may have influenced Israel’s decision to block the two congressmen from entering the country.

“It is pretty clear that there has been a good deal of US pressure. Either Trump was trying to increase that pressure with this tweet or he already knew that the decision has been made in favour of what he was advocating,” he said.

Denying entry to elected US officials could further strain relations between Netanyahu, who has highlighted his close ties with Trump in his re-election campaign ahead of a September 17 vote, and the Democratic leadership in Congress.

Political commentators said a reversal of Israel’s original intention to approve the legislators’ entry likely stemmed from a desire to mirror Trump’s hard line against them.

“Netanyahu has an election coming up. Presumably, it does him good on the Israeli right to make this decision,” Fawcett said. “It’s [the decision] being reported here [Israel] very much as a gift from Netanyahu to Trump.” 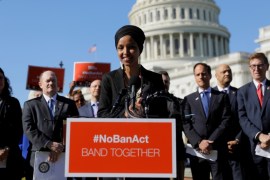 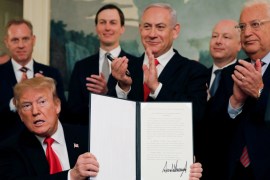 Why Trump recognised Israel’s claim on the Golan Heights

Trump hopes his gestures of unconditional support for Israel will mobilise US evangelicals and win him a re-election. 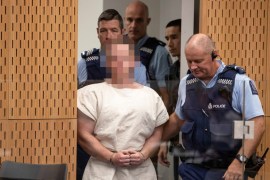 Widely admired by the far right, Israel has joined a global movement to promote far-right politics and anti-Muslim hate. 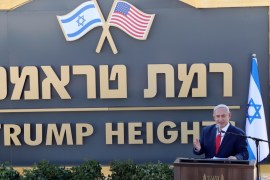