China has demanded that the United States “immediately cancel” a potential $2.2bn arms sale to Taiwan, including battle tanks and anti-aircraft missiles.

The move would be Washington’s first big-ticket military sale to the democratically-governed island in decades, and comes amid deteriorating ties between the US and China, the world’s two largest economies that have been locked in an acrimonious trade war.

It risks further heightening tensions with China, which considers Taiwan a breakaway province and has not ruled out the use of force to bring the self-ruled island under its control.

“China urges the US to … immediately cancel the planned arms sale and stop military relations with Taipei to avoid damaging Sino-US relations and harming peace and stability in the Taiwan Strait,” he added.

“Nobody should underestimate the Chinese government’s and people’s firm determination to defend the country’s sovereignty and territorial integrity and oppose foreign interference.”

According to the US Defense Security Cooperation Agency (DSCA), the deal includes 108 M1A2T Abrams tanks, 250 Stinger portable anti-aircraft missiles, related equipment and support – at an estimated cost of just over $2.2bn.

The proposed sale “will contribute to the modernisation of the recipient’s main battle tank fleet”, improve its air defence system and “support the foreign policy and national security of the United States by helping to improve the security and defensive capability (of Taiwan)”, DSCA said.

It would not alter the “basic military balance in the region”, the agency added, and Congress has been notified.

US legislators have 30 days to object to the sale but are unlikely to do so.

Taiwan has been ruled separately from China since the end of a civil war in 1949, but Beijing considers it a part of its territory.

Beijing has significantly stepped up diplomatic and military pressure on Taipei since the election in 2016 of President Tsai Ing-wen, whose Democratic Progressive Party refuses to acknowledge that the island is part of “one China”, a principle that prevents formal diplomatic relations with Taiwan.

It has staged military exercises near the island, and steadily reduced the already small number of nations that recognise Taiwan.

Al Jazeera’s Wayne Hay, reporting from Beijing, said that China’s reaction to the potential sale did not come as a surprise.

“China views Taiwan as a breakaway province, one that is willing to use force to retake,” Hay said.

“Taiwan, on the other hand, feels that it is coming under increasing military threat from mainland China and needs the support of the US both in the form of hardware military equipment but also logistics.

“This is certainly a provocative move by the US, but one that we’ve seen many times before.”

The US switched diplomatic recognition from Taiwan to China four decades ago, but has remained a key ally – and arms supplier – to Taipei.

Laws passed in 1979 by the US Congress required Washington to provide the island with means of self-defence. But it has been wary of big-ticket military equipment sales to Taiwan in recent years, fearful of stoking anger in Beijing.

US President Donald Trump has, however, sought to strengthen ties with Taiwan and appears more willing to sell arms.

Graham Ong-Webb, an adjunct fellow at the Singapore-based S. Rajaratnam School of International Studies, said the proposed $2.2bn deal was “nothing new” given other recent such arms sales to Taiwan, but described the move as “provocative” given the ongoing US-China trade war.

“This wasn’t a necessary move; the Trump administration could easily have decided to defer this package to a later date and focus its energy on the ongoing trade dispute and coming to terms with China on how to go forward,” Ong-Webb told Al Jazeera.

“[But] now what’s happening is a very rapid derailing of seeing the trade war coming to any sort of resolution because China and the US are treating all issues under one umbrella, there’s no disaggregation of the various issues and it is shaping the tenor of bilateral relations, which right now are at an all-time low,” he added.

Amid the spat between Beijing and Washington, Ong-Webb said the White House’s strategy for Taiwan was to try and “maintain a status quo … by not giving it too much military capability to break away militarily but also not having it in a very weak position to be overrun by Beijing’s army and military forces if the Chinese Communist Party ever seeks to invade the island state and take it over”.

Taiwan would be massively outnumbered in terms of troops and firepower in any conflict with China, and has sought to upgrade much of its increasingly obsolete military equipment, especially in its air force.

Abrams tanks and Stinger missiles – which are portable and can be quickly moved by soldiers in the field – would significantly increase Taiwan’s ability to counter Chinese armour and fighter jets in the event of an invasion.

“The M1A2 tanks are very reliable and will become an essential part of our ground defence” because of their manoeuvrability, Lieutenant General Yang Hai-ming, of the Taiwanese army, told reporters. 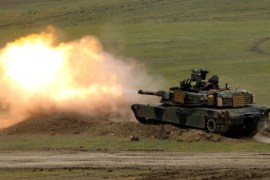 The sale of weapons, including Abrams tanks and Stinger missiles, announced despite Chinese opposition. 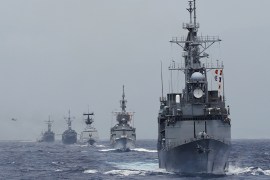 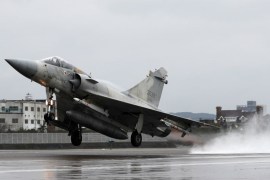 China has stepped up efforts to infiltrate Taiwan – president