Doha, Qatar – Jamila Afghani, a prominent women’s rights activist, was getting ready to address a peace dialogue attended by Afghan leaders and Taliban representatives in Doha, when she got the news of an attack back home.

Taliban fighters had just detonated a car bomb close to the office of Afghanistan’s main intelligence service in Ghazni, killing eight security personnel and six civilians, including a child. The powerful blast on Sunday wounded at least 180 people, including 60 children attending classes at a nearby private school.

Three people out of those wounded were Afghani’s relatives.

“I was very upset when I heard about the attack in Ghazni, and when I received a phone call informing me of my family members injured in the attack, I could barely believe I am here to talk with the Taliban about peace,” Afghani told Al Jazeera on Monday, her voice choking as she fought back tears.

“So I took up the opportunity and addressed to them on behalf of everyone in Afghanistan of how desperate we are for peace.”

Sponsored by Qatar and Germany, the two-day talks in Doha are attended by Taliban representatives and about 50 Afghan politicians and activists, including 10 female delegates.

The gathering was organised in a bid to initiate direct dialogue on sustaining peace and equality in war-torn Afghanistan after the complete withdrawal of foreign troops, which is among the issues on the table in separate United States-Taliban talks also held in Doha but paused for two days to allow for the intra-Afghan meeting to take place.

For the first time since Washington began negotiating with the Taliban last year, two Afghan government officials came face-to-face with Taliban representatives at the intra-Afghan gathering.

Afghani said many young female Afghans were pinning their hopes on her and other women delegates to continue talks with the Taliban on women’s rights in the country.

“The meeting is a good start, we have to keep the dialogue going,” she said, adding that the Taliban’s “mindset” has changed and are “more willing to discuss women’s rights”.

Before the Taliban was toppled in a US-led invasion in 2001, women were banned from working and accessing education under the armed group’s five-year rule.

Afghani, in a bid to encourage women’s education in post-Taliban Afghanistan, worked with more than 6,000 Islamic scholars in 22 provinces to educate them on women’s rights.

The scholars were asked to encourage Afghan men to bring their daughters and wives to her Kabul-based foundation, called Noor Educational and Capacity Development Organization, where Afghani provided free education to women and young girls.

Overall, some 60,000 women have learned to read and write in the schools set up by Afghani’s non-profit organisation since 2001.

‘What is your definition of hijab?’

At the Doha event, women delegates and the Taliban shared tables while dining and respectfully spoke to each other.

Before coming face-to-face with the Taliban, the female participants agreed to be patient during the talks.

During the first day of the event, Fawzia Koofi, a women’s rights activist and politician, recalled how her husband was put in jail under the Taliban rule and that she was beaten for applying nail polish.

“What is your definition of hijab,” she asked the Taliban on the first day of the talks. “Because, during the Taliban time, women were beaten for not wearing a burqa [veil].”

Meanwhile, the US-Taliban negotiations will resume on Tuesday, with both sides aiming to hammer out the details of a framework agreement reached in January during the sixth round of their talks.

Along with a timeline for the US troops’ withdrawal from Afghanistan, the agreement also includes a ceasefire and a Taliban guarantee to not allow foreign groups to use the country as a staging ground for attacks elsewhere.

Zalmay Khalilzad, who is leading the US side on its negotiations with the Taliban in Doha, told Al Jazeera that “substantive progress” has been made in the latest round of talks.

Afghani, along with the other women delegates, said that although they believed that the two-day gathering would not immediately bare results, they were optimistic that it would still help set the ground for future negotiations.

“I think we have to accept that through fighting, no one will win, everybody will have to accept peace,” Afghani said, calling the event “a big step towards peace”.

“The final destination for Afghans is peace, we have suffered for years, especially innocent people.” 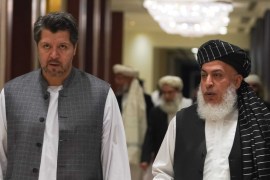 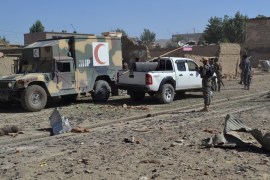