White House senior adviser Jared Kushner said it will not be possible to solve the decades-long Israeli-Palestinian conflict with a deal “along the lines of the Arab Peace Initiative”.

Kushner made the comments during an exclusive interview with Al Jazeera shortly before his departure for a Washington-sponsored “workshop” in Bahrain‘s capital, Manama, where officials and businesspeople from the United States, Israel, and several Arab states will discuss on Tuesday and Wednesday the economic part of the long-delayed US Middle East peace plan.

“I think we all have to recognise that if there ever is a deal, it’s not going to be along the lines of the Arab peace initiative,” said Kushner, who is also US President Donald Trump‘s son-in-law and has been tasked by him to lead the Middle East peace process.

“It will be somewhere between the Arab peace initiative and between the Israeli position,” he added.

Responding to whether a two-state solution was still viable given the recent comments by US Ambassador to Israel David Friedman about Israel retaining the right to annex parts of the occupied West Bank, Kushner called the Arab Peace Initiative “a great effort” but added that “if that was where a deal was going to be made, a deal would have been made a long time ago”.

The two-state solution closely corroborates the Arab Peace Initiative, which was proposed by Saudi Arabia in 2002. The initiative called for normalised relations between Israel and other Arab states in exchange for a full withdrawal by Israel from lands it occupied in the 1967 war, including the Golan Heights, East Jerusalem and the West Bank.

The initiative was re-endorsed over the years by the Arab League but never implemented, as Israel continued its occupation and settlement expansion in the West Bank.

Referring to the two-day conference beginning in Manama on Tuesday, Kushner said he believed the event would be a success despite the boycott by the Palestinian leadership, citing the presence of delegates from regional countries and a large number of international investors.

“We’ve been working very carefully on a very detailed proposal for what we think can help bring this conflict, which has been stuck, forward and we’re hopeful that we’ll be able to put that out soon and hopefully parties will be responsible, they’ll engage on it and they’ll try to move forward.”

Palestinian officials say the gathering circumvents a political settlement based on a two-state solution, and is an ill-fated attempt by the US administration to “liquidate” the Palestinian cause.

His full interview will be broadcast on Tuesday. 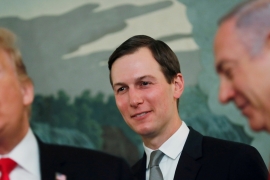 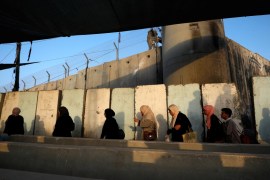 Trapped in their villages by a separation wall and checkpoints, Palestinians lament reality of Israeli occupation. 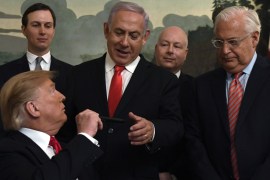 The architects behind the US plan for Middle East peace