Ramallah, occupied West Bank – Hundreds of Palestinians in the occupied West Bank are protesting against the United States‘ Middle East peace plan, taking to the streets on the eve of a US-sponsored summit in Bahrain where Washington is expected to reveal details of its long-awaited initiative.

Starting on Tuesday, the workshop in Manama will see attendees discussing what the US has described as the financial component of its plan to resolve the Palestinian-Israeli conflict.

The two-day event, which is led by Jared Kushner, US President Donald Trump‘s son-in-law and senior adviser, is boycotted by the Palestinian leadership.

Palestinian leaders say the gathering circumvents a political settlement based on a two-state solution, describing it as an ill-fated attempt by the US administration and some of its Middle Eastern allies – including Israel and several Arab countries – to “liquidate” the Palestinian cause.

A number of Arab countries, including Jordan, Egypt, the United Arab Emirates and Saudi Arabia, are sending delegates to the event.

“Some Arab countries are going to participate with low-level representatives, but even mere participation would amount to endorsing the conspiracy against the rights of the Palestinian people,” Issa Qaraqae, a senior of Fatah, which exercises limited rule in some areas of the West Bank, told Al Jazeera.

“We call on the Arab societies to awaken and to make a real stand and support the Palestinian people in blocking this conspiracy,” Qaraqae added. 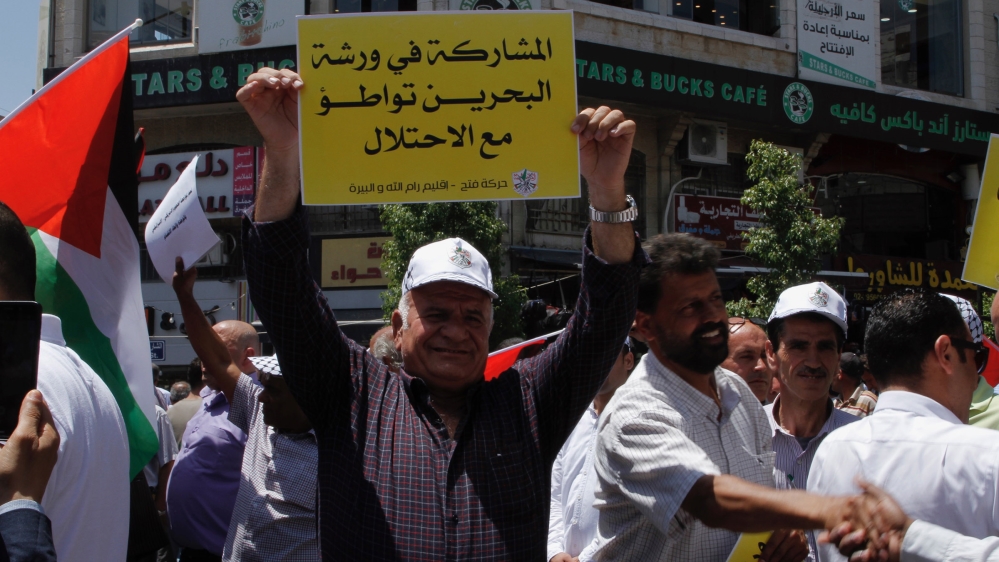 A Palestinian protester in Ramallah holds a sign reading: ‘Participating in the Bahrain workshop is collusion with the occupation’ [Ibrahim Husseini/Al Jazeera]

His comments came as hundreds of protesters on Monday gathered in central Ramallah, where they raised Palestinian flags and held signs condemning the US-led initiative and the Arab countries taking part.

The White House has billed the Manama workshop as “a pivotal opportunity” for government, civil society and business leaders to “share ideas, discuss strategies and galvanise support for potential economic investments and initiatives that could be made possible by a peace agreement”.

The US said its plan would double the Palestinians’ gross domestic product, create a million jobs and lower unemployment to single digits, as well as reduce the poverty rate by half – all within a decade, provided that Palestinians accepted the yet-to-be-announced political settlement plan.

But Kushner’s plan has been rejected by the Palestinians, long before its unveiling.

The Palestinian leadership has excluded the US from any role mediating peace with the Israeli side in the wake of Washington’s recognition of Jerusalem as Israel’s capital in late 2017; the subsequent moving of the US embassy from Tel Aviv there; and the cuts to the funding assistance to the United Nations Relief and Works Agency for Palestine Refugees in the Near East (UNRWA).

The Palestinian leadership has also faced financial trouble since Israel’s move to begin withholding part of the Palestinian tax revenues it collects and transfers to the PA in response to payments given to Palestinian prisoners in Israeli jails and their families.

On Monday, Palestinian Prime Minister Muhammad Shtayeh struck a defiant tone even as he confirmed his government’s financial crisis.

“The financial situation is difficult but we will not surrender and we will not brand our martyrs and prisoners as terrorists,” Shtayyeh told his cabinet, before criticising the Manama workshop.

“The context of the Bahrain workshop is thin and its outputs are sterile and our absence has delegitimised it,” he said. “The Palestinian cause has a political solution: ending the occupation and control of our resources,” he added.

The workshop in Bahrain is also likely to sour relations between Palestinians and participating countries – although no senior Palestinian official has commented publicly on the issue.

Calling the event a “trap”, Ramzi Rabah, of the Democratic Front for the Liberation of Palestine-DFLP, warned Arab countries against providing legitimacy to the “deal of the century”.

“There are disagreements [with Arab countries] in vision, disagreements in positions we hope the Arab position becomes realigned with the Palestinian interests,” Rabah told Al Jazeera in Ramallah’s Manara square.

“We call on the Arab countries to listen to the voice of its peoples in Amman, Beirut, Baghdad, Morrocco, Yemen and Tunis that have all came out against this workshop,” Rabah added.

In Lebanon, where there is a large presence of Palestinian refugees, Lebanese Parliament Speaker Nabih Berri came out against Kushner’s plan.

“Those who think that waving billions of dollars can lure Lebanon, which is under the weight of a suffocating economic crisis, into succumbing or bartering over its principles are mistaken,” Berri said in a statement.

“One message has to be clear to all the countries participating in Manama,” Mustafa Barghouti, the leader of the Palestinian National Initiative, told Al Jazeera.

“This is happening against the will of the Palestinian people.”

In the Palestinian refugee camp of Dheisheh in Bethlehem, Palestinians also gathered to denounce the Manama workshop.

At the rally on Monday, protesters unveiled a large poster with the images of three leaders imprinted on it: Trump, Israeli Prime Minister Benjamin Netanyahu, and Bahrain’s King Hamad bin Issa Al Khalifa. A large X was covering each leader’s face.

“The Manama workshop, in short, is an American-Zionist conspiracy to end the political rights of the Palestinian people,” Muhammad al-Ja’afari, local Fatah leader, told Al Jazeera.

“We expected, and we hoped that no Arab country would participate in this conference which amounts to a stab in our chest and our back by a poisonous American-Zionist dagger,” al-Ja’afri added.