Sudan’s ruling Transitional Military Council has said the army will not accept unrest in the country, a day after protesters said soldiers were trying to disperse a sit-in in capital Khartoum.

“We will not accept chaos. We will deal with it firmly in accordance with the law,” Mohamed Hamdan Dagalo, the Transitional Military Council’s vice president, said in a press conference on Tuesday.

“We do not want to escalate the situation. We are committed to negotiation. After today, there will be no chaotic scenes,” he added.

Thousands of protesters have been camping outside the army headquarters in Khartoum, almost three weeks after the military and security forces removed former president Omar al-Bashir from power on April 11

On Monday, Sudan’s main protest group said the military was trying to remove barricades at the sit-in outside the army headquarters.

“The military council is a copy cat of the toppled regime. The army is trying to disperse the sit-in by removing the barricades,” said the Sudanese Professionals Association (SPA), the group that first launched a movement against al-Bashir’s regime.

Al Jazeera’s Mohamed Vall, reporting from Khartoum, said Dagalo‘s statements will not be welcomed by the protesters.

“The statement will be seen negatively by the protesters who believe the army is wrong. They have been categorical in calling for a civilian authority to be put in charge of the country,” Vall said.

“They will see it as a provocation and might affect the ongoing negotiation between the army and protesters.”

A country of more than 40 million people, Sudan has been suffering from a deepening economic crisis that has caused cash shortages and long queues at its bakeries and petrol stations.

Demonstrators first took to the streets in December last year following a rise in the price of bread, a staple food in the northeast African country. The unpopular economic move caused widespread anger.

Until recently, Sudan was also under crippling sanctions imposed by the United States, which lasted two decades until being lifted in October 2017. 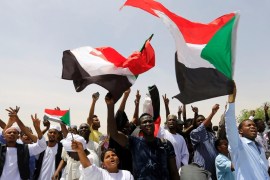 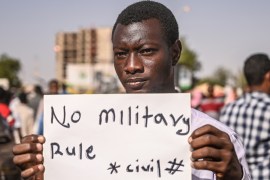