Floods in Iran have killed 76 people and caused more than $2.2bn in damages in recent weeks, with flood warnings still in place for large swaths of the country.

Six more people were confirmed dead in the country’s south, according to a new toll published on Sunday.

“With the death of five people in the Khuzestan province and another person in Ilam province, the death toll has now reached 76,” since March 19, a statement by the coroner’s office said.

The two southwestern provinces are the latest to be overwhelmed by floods that first hit the northeast of the usually arid country, forcing hundreds of thousands to evacuate from cities and villages.

Officials have again issued flood warnings for the east of Iran, with heavy rains that began on Saturday forecast to continue.

“Twenty-five provinces and more than 4,400 villages across the country were affected by the floods,” Interior Minister Abdolreza Rahmani-Fazli told parliament, according to the official IRNA news agency.

“More than 14,000 kilometres of roads have been damaged,” he said, according to IRNA.

The head of Iran’s meteorology service told the same parliamentary session that the floods do not necessarily mean that a decades-long drought has ended.

“The recent floods were due to climate change and global warming,” Sahar Tajbakhsh said.

The government of President Hassan Rouhani has been mounting relief efforts, enlisting the help of the cash-strapped banking system to offer help in the form of cheap or interest-free loans.

“Everything that comes through these doors is donated by private citizens,” said Al Jazeera’s Zein Basravi, reporting from an aid camp in the capital, Tehran.

“So far, volunteers who have been at it for about three weeks have collected and dispatched 30 truckloads of supplies worth tens of thousands of dollars to flood-hit areas all over the country.”

The Islamic Republic has received aid from neighbouring countries and further afield, with France on Saturday donating 210 tents and 114 pumps.

The World Health Organization and UNICEF are also helping, as are Germany, Iraq, Kuwait, Oman, Pakistan, Russia and Turkey.

But, aid workers in Iran say US sanctions are hampering their ability to help those affected.

“Right now, we need some boats and machinery to control the water flow,” Fereshte Ghaffari, a volunteer for the Imam Ali society said.

“It would be much easier for international agencies to provide them. Due to the sanctions, prices are [also] much higher. If it wasn’t for sanctions, [things wouldn’t be as expensive] and we could do much more with the money we’ve collected,” she told Al Jazeera. 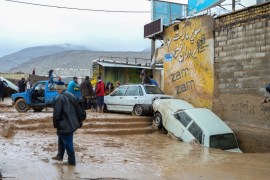 Despite flooding that has killed 70, Iran’s efforts to establish an insurance fund are hampered by a lack of resources. 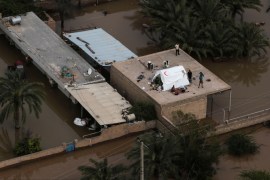