Iranian President Hassan Rouhani has condemned the suicide bombing in the country’s Sistan-Baluchestan province, and vowed to punish the “criminal mercenaries” who carried out the attack that killed 27 members of the elite Islamic Revolutionary Guard Corps.

“Without a doubt, all perpetrators and those who ordered this vicious, flagrant act will be punished soon with the hard work of the powerful security forces of the country,” Rouhani said in a statement published on his website on Thursday.

He said that the attack on Wednesday night was “another shame in the dark history of the main sponsors of terrorism”, drawing a link between the incident and actions by the United States, Israel and their “regional agents” against Iran.

In a separate statement before leaving for the Russian city of Sochi, Rouhani was also quoted by the IRNA news agency as saying that Tehran will make those responsible for the deadly incident “pay for the blood of our martyrs”.

Later, Ayatollah Ali Khamenei, Iran’s Supreme Leader, also weighed in saying that the link between the perpetrators of the attack “and the spy agencies of certain regional and extra-regional countries is obvious”.

On Thursday, Ahmad Ali Mouhebati, governor general of Sistan-Baluchestan, which borders Pakistan, declared three days of mourning in the honour of the victims.

Bahram Ghasemi, a spokesman of the Foreign Ministry, also issued a statement saying the attack will be “avenged soon”.

“The self-sacrificing Iranian military and intelligence personnel will take revenge for the martyrs of this incident,” Ghasemi said on Thursday.

Earlier, Iranian Foreign Minister Mohammad Javad Zarif said that “it is no coincidence” that his country was hit on the same day that the US held a summit in Poland, which is seen as aimed at countering Iran.

“US seems to always make the same wrong choices, but expect different results,” he wrote on social media on Wednesday shortly after the attack.

Abas Aslani, a visiting scholar at the Centre for Middle East Strategic Studies in Tehran, said that Jaish al-Adl is an offshoot of the armed group Jundullah, whose leader Abdolmalek Rigi was captured and executed by Iran in 2010.

He said the new armed group is “supported and sponsored” by Saudi Arabia, to carry out attacks inside Iran, its regional rival.

Jaish al-Adl and its affiliate groups based in neighbouring Pakistan have been accused of committing cross-border attacks against Iranian forces.

Aslani said that the attack demonstrates the “contradiction” of what Saudi Arabia and its ally the US are doing in the Polish capital, Warsaw, and what is happening on the ground in the Middle East.

“In Warsaw, the slogan is the fight against terrorism, and the effort to bring stability to the region. But here in the region, something else is happening,” he said, pointing to the deadly incident last night.

Aslani said he expects a swift response from the government against those who are responsible, but added that Tehran “will not apply the same approach” as its enemies, and will not be baited into an escalation of violence.

The attack also hurts the local population in Sistan-Baluchestan, which is trying to introduce the area as a tourism destination as a way to help reduce poverty in the region, she said, while laying part of the blame on neighbouring Pakistan, which shares a porous border with Iran.

“The repetitions of this kind of attacks are increasing recently, and the government in Pakistan is doing nothing about these terroristic groups which attack Iran’s soldiers and go back to Pakistan,” she added.

Karimkhan predicted that Iran’s military will not stay quiet on the issue, hinting at more pressure on the Pakistani government.

She pointed to a comment on social media on Thursday by Hesamaldin Ashena, an adviser of Rouhani, who wrote, “Those who are not committed to Iran’s security should worry about disrupting their own security.”

“I think this statement is a serious threat against Pakistan. But that does mean Iran will do something with ‘hard power’. I don’t think so.”

Meanwhile, Ali Ahmadi, a geopolitical analyst and Iran observer, said that he expects the Revolutionary Guard to have a targeted response against Jaish al-Adl.

“The more complicated issue is that the IRGC has long believed that these groups receive material support from the US, Saudi Arabia and Israel who all have implied, or outright said that supporting separatist movements could be part of their policy against Iran.”

In recent months, the Sistan-Baluchestan area has seen several attacks, including a suicide car bombing in the port city of Chabahar in December, which left four police officers dead and 42 other people wounded.

Jaish al-Adl is also accused of abducting members of the Revolutionary Guard on the Sistan-Baluchestan border with Pakistan in October 2018.

In December 2010, 41 people were killed and 90 others wounded after a suicide attack near a mosque in Chabahar.

At least 29 people, many of them Revolutionary Guard draftees, were killed in Ahvaz in September during a military parade commemorating the end of the Iran-Iraq War in 1988. 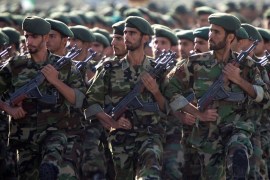 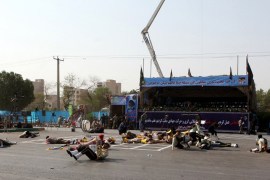 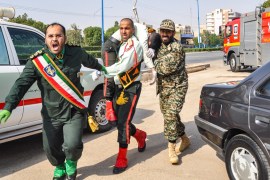 Iran: Who was responsible for the deadly attack in Ahvaz?

Ahvaziya group and ISIL claim role in the attack, while Ayatollah Khamenei blames ‘US-backed regimes in the region’.