World leaders attending a NATO summit in London appear to have been caught on video discussing US President Donald Trump with one leader apparently describing his comments as “jaw-dropping”.

The video widely shared on social media shows Johnson, Macron, and Trudeau caught by a microphone discussing why the French leader was late for the reception, following his awkward news conference with Trump.

Nato leaders slagging off Trump while Princess Anne laps it up – not giving a single shit – is also the mood we need to take into today pic.twitter.com/OLxmFRzqk1

A snickering Johnson asks Macron, “Is that why you were late?”

With a beverage in his hand, Trudeau interjects: “He was late because he takes a 40 minute press conference off the top”, apparently referring to Macron’s testy exchange in front of reporters with Trump, who at one point asked the French president if he “wants to take some ISIS [ISIL] fighters back, because we got lots of them”.

Later, the video shows the three in an animated discussion with the Canadian leader saying: “You just watched his team’s jaws drop to the floor”, motioning with his hand to his face.

It is unclear from the audio recording whether Trump is actually the focus of their conversation.

Footage of the palace reception was recorded by a pool camera. It was posted online by Canadian broadcaster CBC and has been viewed more than four million times.

The US president bantered with reporters for more than two hours on Tuesday, sitting casually in a salon of Winfield House, the manicured estate of the US ambassador to the United Kingdom, where he also met fellow NATO leaders.

The US leader has taken NATO allies to task for not spending enough on their militaries – an issue the leaders of Germany, France, and Canada were likely to bring up during Wednesday’s final gathering. 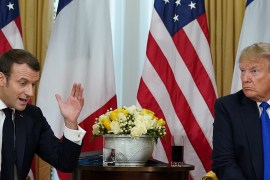 In a final communique, NATO allies expected to recommit pledge to defend each other and warn China over its military. 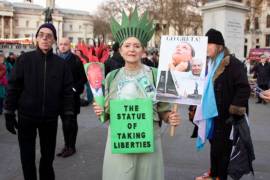 In sharp exchanges before a NATO summit, US and French leaders trade barbs over future of the military alliance.