Kuala Lumpur, Malaysia – Former Malaysian Prime Minister Najib Razak took the witness stand on Tuesday, in a highly anticipated appearance before the High Court in Kuala Lumpur, as he fights off the first of several cases related to the multi-billion dollar scandal at state fund 1MDB.

Najib had pleaded not guilty to charges that he illegally took 42 million ringgit ($10m) from SRC International, a unit of 1MDB.

After an opening statement from lead defence lawyer Muhammad Shafee Abdullah, who said the former prime minister and finance minister had not acted corruptly and had worked at all times in the best interests of Malaysia, Najib entered the witness box to read out his 243-page statement.

“Najib is not part of the conspiracy,” Shafee told journalists after the court broke for lunch. “Najib is a victim as much as the other victims of 1MDB and SRC.”

“The entire scheme was devised by Jho Low, together with four Arabs, two from Saudi and another two from Abu Dhabi. The entire management of 1MDB and SRC were all paid off by Jho Low. They were also eating from the palms of Jho Low.”

Earlier, on social media, Najib had said that he was looking forward to “the chance to clear my name in court”.

As he chatted with his lawyers before proceedings began, Najib appeared relaxed.

Asked whether he was confident about his testimony, he told Al Jazeera: “I am good. I feel fine. Whatever I can do, I will do.”

About 40 people, mostly from his political stronghold of Pekan on the east coast, waited outside court to show their support to the former prime minister who remains an opposition member of parliament.

Among them was 60-year-old Hajjah Radiah who was attending the hearing for the first time.

“I have been a longtime supporter of Najib,” Hajjah said. “He has done so much for the Malaysian people.”

The case centres on SRC International, a unit of 1MDB, the controversial state fund that the United States Department of Justice alleges was drained of $4.5bn of government money during Najib’s time as prime minister.

Najib pleaded not guilty to all seven charges when the trial began in April. He has denounced the legal proceedings, which lasted until August, as political witch-hunt.

On November 11, the court ordered Najib to enter his defence, saying he had “enormous and overarching influence” over the fund.

The judge noted that Najib also held the finance ministry portfolio, giving him “considerable power” to order where the money from SRC should go.

After the court decision was announced, Shafee had said that Najib was “shocked”, because he had been expecting to be absolved of the charges.

If convicted in the case, the former prime minister could face between 15 and 20 years in jail.

The second and biggest case covers several charges including 21 counts of money laundering involving $550m directly from 1MDB, while the third case, which started on November 18, relates to alleged abuse of power and cover up of an audit report at 1MDB. Two more trials are still pending.

As the cases continue, Najib remains free on bail criticising the policies of his former mentor, Prime Minister Mahathir Mohamad and the coalition that removed him from power in May last year.

Public anger about alleged corruption during Najib’s near-decade as leader led to his electoral defeat, and the return of Mahathir, who was previously prime minister between 1981 and 2003.

As the tired-looking former prime minister left the court on Tuesday, following more than five hours of testimony, a reporter asked him if he expects a fair trial.

Najib’s direct testimony will continue on Wednesday, and is expected to last until next week. After which, he will face a cross-examination by prosecutors. 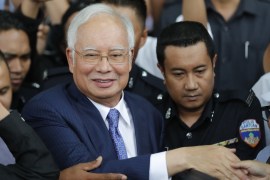 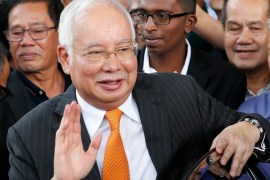 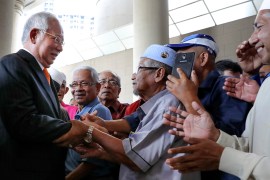