An ally of Chile‘s president sparked outrage on Monday when he said violations of human rights were necessary in order to restore peace to the country, as police used tear gas and water cannon to disperse protesters in the capital.

The demonstrations, which have been going on for more than a month, have been largely peaceful although President Sebastian Pinera acknowledged that the military had used excessive force to clamp down on particularly violent protesters.

In Santiago on Monday, demonstrators engaged in a running battle with authorities as they threw objects at police. Paramedics were also seen carrying an injured man while officers detained several protesters.

Marches and rallies have been taking place in Santiago and other parts of the country to campaign for improved living standards such as higher wages and pensions and a better education system.

Pinera announced recently he wanted to increase the number of police on the streets and give new powers to the armed forces to protect public infrastructure.

But she said that many people were “very unhappy” about giving more power to the military, which has been accused of rights violations during the protests.

Chile’s National Institute of Human Rights recently said 26 people have been killed and more than 2,300 civilians injured in the protests.

Earlier, Pinera ally Senator Andres Allamand sparked outrage by suggesting that normality could not be restored without violating human rights.

Allamand, a former defence minister, made the remarks hours before Monday’s round of anti-government protests began.

“Without human rights violations, it is impossible to normalise the situation in the country,” he told a television news programme.

An Amnesty International report has accused Chile’s security forces of deliberately injuring protesters during more than a month of demonstrations over social inequality.

The report also said that the incidents were not isolated acts.

“The intention of the Chilean security forces is clear: to injure demonstrators in order to discourage protest,” Erika Guevara-Rosas, Americas director at Amnesty said.

The comments led to a wave of anger on social media. 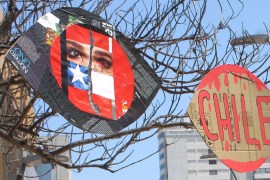 Chile police continue to use pellet rounds despite suspension

The use of ‘balines’ projectiles had been forbidden except for in the most extreme situations. 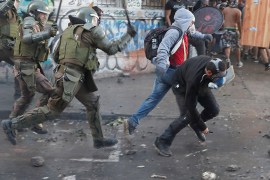 The international rights group says rights abuses against protesters ‘are not isolated acts’. 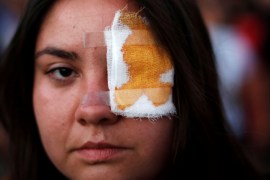 Chile police suspend use of rubber bullets amid eye injuries

A Chilean human rights group has documented 222 cases of hospitalisation for eye injuries.