“I was concerned by the call. What I heard was improper. And I reported my concerns” to White House lawyers, Vindman told the impeachment inquiry.

“It is improper for the president of the United States to demand a foreign government investigate a US citizen and political opponent,” said Vindman. “It would be interpreted as a partisan play.”

That July 25 call is at the core of the impeachment inquiry, which Democrats launched earlier this year following a whistle-blower complaint. During the call, Trump asked Ukrainian President Volodymyr Zelenskyy to open an investigation into former Vice President and 2020 presidential hopeful Joe Biden and allegations that Ukraine, not Russia, meddled in the US 2016 elections. Vindman and Williams were among a handful of officials who listened to the call.

At the time of the call, the Trump administration was withholding nearly $400m in congressionally approved security assistance from Ukraine, prompting speculation the US president was using the money as leverage to get his desired investigations.

Williams said she thought Trump’s call with Zelenskyy was “unusual” because “it involved discussion of what appeared to be a domestic political matter”.

‘The more we learn, the worse it seems to get’

Democrat Adam Schiff said, “Career professionals became concerned that President Trump, through an irregular channel that involved his acting chief of staff, Mick Mulvaney, EU Ambassador Gordon Sondland and Rudy Giuliani, was pushing a policy towards Ukraine at odds with the national interest.”

As a result, Zelenskyy knew in advance of the July 25 call of Trump’s interest in investigations of Biden and 2016, Schiff said, outlining the timeline of events before and after the call.

“From the Democrats’ point of view, the phone call is very incriminating, but they also want to show that Trump’s statements were not casual or off-the-cuff remarks,” said Louis Michael Seidman, a constitutional law professor at the Georgetown University Law School.

“Instead, they were the culmination of an intense, coordinated, and government-wide campaign,” Seideman told Al Jazeera.

“The Republicans have gestured towards the position that the campaign was conducted without Trump’s knowledge or approval, but that view is becoming difficult to sustain,” he said.

In May, Trump had directed a small group of top officials to work with his personal lawyer Giuliani on policy towards Ukraine. Following that meeting, Ambassador Sondland, who is scheduled to testify on Wednesday, played a key role in communicating to Ukrainians Trump’s demands for political investigations, according to testimony.

Former National Security Adviser John Bolton, who was presiding over the meeting, abruptly ended the conversation “when Ambassador Sondland started to speak about the requirement that Ukraine deliver specific investigations in order to secure the meeting with President Trump”, Vindman said.

The “witnesses have painted a picture of a bribery conspiracy that includes Trump, Giuliani and Sondland. The more we learn, the worse it seems to get,” said Barbara McQuade, professor of law at the University of Michigan Law School and a former federal prosecutor.

“Trump wants to focus on the call to deflect attention from other facts, perhaps some that are still unknown,” McQuade told Al Jazeera.

Trump has released a White House memo of the call and argued his conduct was “perfect”. During the hearing, Trump tweeted a short video calling the impeachment inquiry a “charade”.

“All of these people are talking about they heard a conversation, a conversation of another conversation that was had by the president. What’s going on is a disgrace, and it’s an embarrassment to our nation,” Trump told reporters at the White House on Tuesday.

Republicans on the committee decried the impeachment effort broadly as a partisan campaign against Trump and attempted to undercut Vindman’s credibility throughout the day.

Devin Nunes, the top Republican on the Intelligence Committee, said the impeachment inquiry should hear publicly from the whistle-blower and look into allegations of Ukrainian interference in the US 2016 election.

There is no credible evidence that Ukrainians were involved in hacks of Democratic emails in the 2016 election, Vindman said. “This is a Russian narrative that President Putin has supported,” he said.

Nunes said Republicans continue to want answers to questions why Ukrainian energy company Burisma hired Hunter Biden and what his role was on the gas company’s board while his father, then-Vice President Biden, was engaged on US-Ukraine relations.

The two investigations Trump wanted from Zelenskyy were “an alternative narrative, a false narrative”, Vindman said. US intelligence agencies concluded that the hacking came from Russia.

Nunes attempted to get Vindman to acknowledge he had been among the White House officials who spoke to the anonymous whistle-blower after the July 25 call. Schiff intervened to say the purpose of the hearing was not to bring out the whistle-blower’s identity, which is protected under US law.

Volker: ‘I should have seen the connection differently’

Following the morning session, a second hearing of the day kicked off with Volker, the former special envoy to Ukraine and Morrison, a National Security Council official.

Volker told the impeachment inquiry he did not fully understand that by raising Burisma, Trump was demanding Ukraine investigate the Bidens.

“Throughout this time, I understood that there was an important distinction between ‘Burisma’ and ‘Biden’ and urged the Ukrainians to maintain such distinction,” Volker said.

“In retrospect, I should have seen that connection differently and had I done so, I would have raised my own objections,” he said.

He added that the “allegations against Vice President Biden are self-serving and not credible”.

Morrison, whose job on the White House National Security Council was to coordinate US inter-agency policy towards Ukraine, said he was disappointed by Trump’s call with Zelenskyy.

“I was hoping for a more full-throated statement of support from the president for President Zelenskyy’s reform agenda,” Morrison said.

Trump’s mentions of Biden, 2016, Burisma and Crowdstrike, were not part of the NSC’s official policy points provided to the president for the call, Morrison said. Crowdstrike is a cybersecurity firm that first investigated the Russian hacks of DNC computers in 2016.

Morrison approached a White House lawyer after the call and recommended access to the memorandum of the call to be restricted because he was afraid of what would happen if it leaked.

“I feared at the time of the call on July 25th how its disclosure would play in Washington’s political climate. My fears have been realised,” he said.

The White House responded to Tuesday’s House impeachment proceedings in real time, stepping up pushback after facing criticism that it was not doing enough to defend the president, according to the Associated Press news agency.

The White House sent out five “rapid response” emails to reporters before the witnesses were even sworn in for questioning, the AP reported. The notes continued throughout the proceedings to defend Trump and try to undermine the credibility of the witnesses appearing.

The impeachment inquiry could lead to formal charges – known as the article of impeachment – against the president. The House would have to approve the charges before they would be sent to the Republican-controlled Senate for trial. If the Senate votes to convict the president, which appears unlikely at this time, Trump would be removed from office. 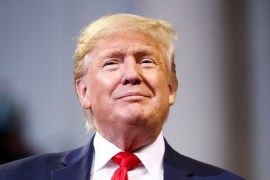 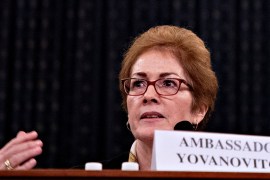