Super Typhoon Hagibis has developed quickly in the western Pacific, strengthening from a tropical storm to a super typhoon in just 24 hours.

This makes Hagibis the 20th storm in the region this season, among the most explosive rapid intensifications of any tropical cyclone on record.

Between 12:00 GMT on Sunday to the same time on Monday, the system’s winds went from 100 kilometres per hour to 250km/h as its centre neared the northern Mariana island of Anatahan.

Only Atlantic Hurricanes Patricia (October 2015) and Wilma (2005) are known to have strengthened more quickly.

Super Typhoon Hagibis is now located approximately 380km northwest of Guam. It has sustained winds of 250km/h and gusts of nearly 305km/h.

It is already equivalent to a strong Category 5 Atlantic hurricane and is expected to strengthen over the next 24 hours with winds touching 260km/h.

The storm is expected to continue northward before veering off to the northeast.

Mainland Japan appears to be most at risk of a direct impact from Hagibis. However, there is no clarity as to where the worst impact will be.

Hagibis will be weakening as it nears Japan because of the increasingly unfavourable upper-level winds. That said, it should still be a strong and dangerous typhoon.

Honshu is likely to be the worst-hit. The latest projections take the eye of the storm right over Tokyo at about 18:00 GMT on Saturday, which looks like a dreadful day for much of Honshu.

The storm could still be equivalent to a Category 2 hurricane by then with winds at approximately 160km/h, gusting to 200km/h.

Therefore, there is a possibility of Hagibis affecting the World Cup rugby, particularly the two games taking place in Yokohama over the weekend.

Heavy rain is likely for much of the day and 200-300mm of rain is possible by the weekend. One or two places could see even more.

Along with the damaging winds and torrential rain, large waves and storm surges are likely to cause life-threatening floods and possibly mudslides leading to widespread disruption. 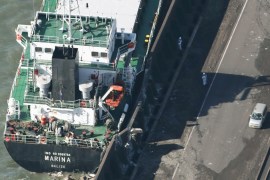 Japan: Typhoon Trami kills two as it brushes past Tokyo 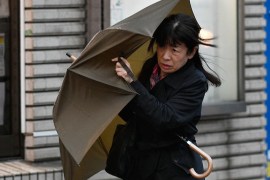