At least 20 people have been killed in twin blasts at a Roman Catholic cathedral on the southern Philippine island of Jolo.

Sunday’s incident claimed the lives of at least 15 civilians and five soldiers, police said, adding that 111 others were wounded.

The number of fatalities was revised after police earlier said that 27 people were killed.

The Islamic State of Iraq and the Levant (ISIL) group claimed responsibility for the bombings, the SITE monitoring group reported, citing the fighters’ Amaq website.

According to security officials, the first bomb went off in or near the cathedral of Jolo, the capital of Sulu province, followed by a second blast outside the compound as government forces were responding to the attack.

The initial explosion scattered the wooden pews inside the Cathedral of Our Lady of Mount Carmel and blasted window glass panels, and the second bomb hurled human remains and debris across a town square fronting the church, witnesses said.

President Rodrigo Duterte’s spokesman Salvador Panelo condemned the “act of terrorism” and vowed that government forces will pursue the perpetrators of the attack.

“The Armed Forces of the Philippines will rise to the challenge and crush these godless criminals,” he said.

In a separate statement, the Philippine army said the explosions were likely caused by improvised explosive devices (IEDs).

Photos on social media showed debris and bodies lying on a busy street outside the Cathedral of Our Lady of Mount Carmel, which has been hit by bombs in the past.

Troops in armoured carriers sealed off the main road leading to the church while vehicles were transporting the dead and wounded to the hospital.

Some casualties were evacuated by air to nearby Zamboanga city.

“I have directed our troops to heighten their alert level, secure all places of worships and public places at once, and initiate proactive security measures to thwart hostile plans,” said Defence Secretary Delfin Lorenzana in a statement.

Bishop Angelito Rendon Lampon served as a priest at the Cathedral for almost two decades, until his transfer to Cotabato, another city in Mindanao, last week. He said many of his former parishioners were shaken following the attack.

“I know many of the victims because I worked there for 21 years. I am praying for the victims and their families,” Lampon told Al Jazeera.

“We are condemning this attack. Those who are responsible have no respect even for the sanctity of the place,” he said, adding that the priest, who was officiating the mass at the time of the bombing, Fr. Ricky Bacolcol, “was still in shock and could not speak about what happened”.

According to Lampon, the first of the two explosions reportedly happened while the parishioners were saying their offertory prayers.

Jolo has long been troubled by the presence of Abu Sayyaf, an armed group blacklisted by the United States and the Philippines as a “terrorist organisation” because of years of bombings, kidnappings and beheadings.

Al Jazeera’s Jamela Alindogan, reporting from the capital, Manila, said the timing of the attack was “suspicious”.

“Last week, there was a referendum and the island of Jolo voted to not be part of this new autonomous government that is being created,” she said.

The Bangsamoro, meaning Moro nation, is an expanded autonomous region, that is expected to replace the existing ARMM, which has been criticised as merely nominal, and failed to end the violent conflict that has left at least 120,000 people dead over the past five decades.

On Friday, it was announced that voters in Mindanao overwhelmingly voted for the creation of the Bangsamoro. However, voters in Jolo and the entire Sulu province voted against the new regional unit. 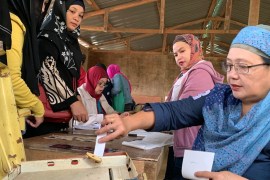 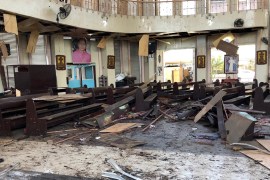 Can there be peace in the southern Philippines?

Two bomb blasts on Sunday are a reminder that the security situation in the southern Philippines remains fragile. 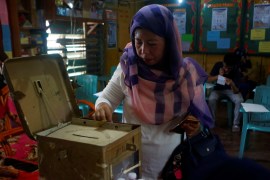