The Democratic Republic of Congo (DRC) has announced a new outbreak of the deadly Ebola virus, just days after a recent emergence of the disease, which killed 33 people, was declared over.

Four cases of the virus were confirmed in northeastern North Kivu province, the DRC’s health minister said in a statement on Wednesday, though there was no indication they were linked to the country’s previous – and ninth – Ebola outbreak in northwestern Equateur Province.

“Although we did not expect to face a tenth epidemic so early, the detection of the virus is an indicator of the proper functioning of the surveillance system,” Health Minister Oly Ilunga said.

However, it might be impossible to use a vaccine to tackle the new outbreak, Peter Salama, a senior World Health Organization (WHO) official, said.

Officials have not confirmed the particular strain of Ebola causing the outbreak but Salama said it could be the Zaire, Sudan or Bundibugyo strain.

If it is the Zaire strain, the Merck vaccine used in the last outbreak may be an option, otherwise the situation will be much more complex “and we may not have any vaccine options”, he told Reuters at WHO’s headquarters in Geneva.

International experts on Thursday set up a laboratory in the city of Beni, 30km from where the outbreak was declared.

Ebola is a virus-caused hemorrhagic fever that in extreme cases causes fatal bleeding from internal organs, the mouth, eyes or ears. 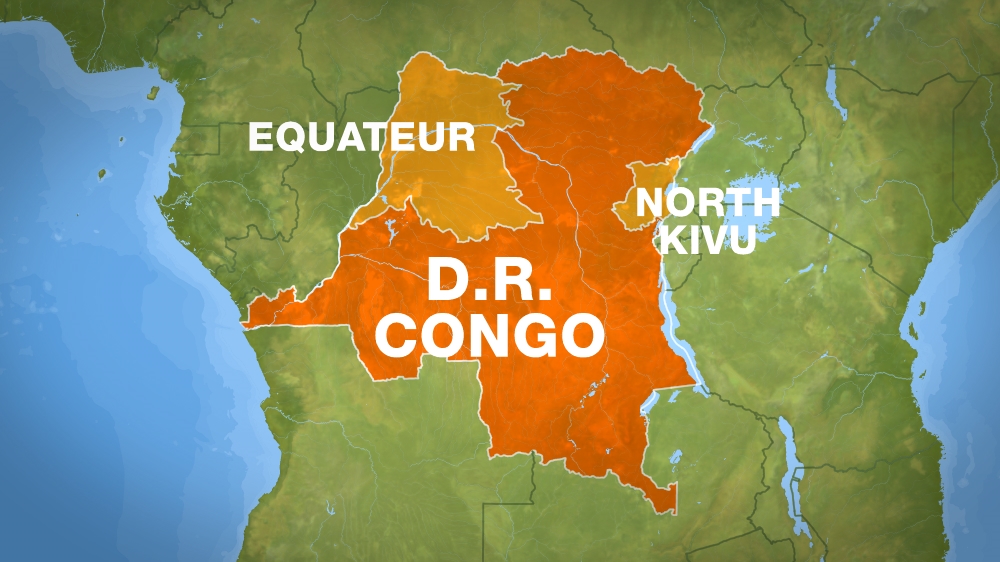 North Kivu authorities alerted the health ministry on Saturday that 26 cases of hemorrhagic fever, including 20 deaths, had occurred in and around Mangina, a town about 30km west of the city of Beni and 100km from the DRC’s border with Uganda.

Six samples were taken from hospitalised patients and sent to the National Institute of Biological Research in Kinshasa, the capital, for analysis. Four of the samples tested positive for the Ebola virus.

A team of 12 experts from the health ministry will arrive in Beni on Thursday to set up a response operation, the ministry said, and local travel restrictions were being implemented.

Tedros Adhanom Ghebreyesus, director general of the World Health Organization (WHO), said in a tweet on Wednesday that health officials would continue to fight the “constant threat” of Ebola in the DRC.

#Ebola is a constant threat in #DRC. We will fight this one as we did the last. We have started moving staff and supplies to the affected area, working with @MinSanteRDC and partners. https://t.co/7RADmzbc6q

The latest outbreak comes after DRC authorities declared a previous emergence of the disease – which has no proven cure – over on July 24.

The declaration brought the curtain down on an outbreak which began two months earlier in the remote northwestern area of Bikoro, about 2,000km from Mangina, on May 8 and culminated in 54 confirmed cases of Ebola, 33 of which proved fatal.

The outbreak took place fewer than 12 months on from the DRC’s previous Ebola scare, in May 2017, during which eight people were infected, four of whom died.

The average fatality rate among those infected with Ebola is about 50 percent, according to the WHO.

An epidemic of the virus killed about 11,300 people in West Africa as it surged through Guinea, Sierra Leone, and Liberia between 2013 and 2016.