US President Donald Trump said on Tuesday that his ties with Qatar were working “extremely well” as he welcomed Qatar’s Emir Sheikh Tamim bin Hamad Al Thani to the White House for bilateral talks.

Below a transcript of the conversation that took place at a news conference after their meeting.

President Trump: Thank you very much. It’s a great honour to have the Emir of Qatar with us.

He’s a friend of mine – knew him long before I entered the world of politics. He’s a great gentleman.

He’s very popular in his country. His people love him. We’re working on unity in that part of the Middle East, and I think it’s working out very well. There are a lot of good things happening.

Also, we have a gentleman, on my right, who buys a lot of equipment from us. A lot of purchases in the United States, and a lot of military airplanes, missiles – lots of different things.

But they’ve been great friends in so many ways. We’re working very well together, and I think it’s working out extremely well.

So, Emir, thank you very much for being here. Appreciate it.

We have a gentleman, on my right, who buys a lot of equipment from us.

Emir Al Thani: I’m very happy and honoured to be here, and thanks for this invitation.

Our relationship between Qatar and the United States has been more than 45 years. It’s a very strong, solid relationship. Our economic partnership is more than $125bn, and our aim and goal is to double it in the next coming years.

Our military cooperation is very solid, very strong. As everybody know, that the heart of fighting terrorism is from Al Udeid Base. And, thank God, it’s been a very successful campaign against the terrorist groups around our region.

Lately, before I come here, I was in Tampa. I visited the CENTCOM, and we met with the generals. And it was a very important visit, and it shows how strong our cooperation is between the armed forces.

Of course, we speak today and we see the suffering of the Syrian people.

Thank you very much, Mr President.

Our economic partnership is more than $125bn, and our aim .. is to double it.

President Trump: Thank you. And Tamim and I have been working for a number of years now – actually, even before the fact – on terrorism.

And we’re making sure that terrorism funding is stopped in the countries that we are really related to – because I feel related. But those countries are stopping the funding of terrorism, and that includes UAE; it includes Saudi Arabia; it includes Qatar and others.

A lot of countries were funding terrorism and we’re stopping it. It’s getting stopped and fast. Very important. And you’ve now become a very big advocate, and we appreciate that.

I would like to also thank the President for him being involved personally in solving the GCC crisis. He’s been very helpful.

He’s been supporting us during this blockade.

And I would like to also thank the American people for being very supportive. And his role is very vital to end this crisis in our region.

President Trump: Thank you very much. Thank you. 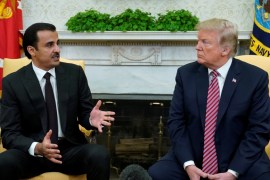 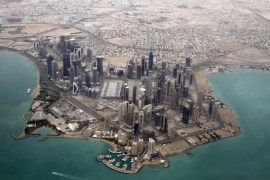 What should Qatar do to resolve the Gulf crisis, ‘post-Rexit’

Even after Rex Tillerson’s sacking, Qatar has ways to encourage the US to engage in efforts to resolve the Gulf crisis.