At least five Iranian security forces were killed in separate car-ramming attacks and a stabbing, blamed on Sufi Muslim followers who had been protesting alleged religious repression by the government in Tehran.

Three police officers were killed and several wounded in the first incident on Monday evening, when a minibus ran them over as they tried to contain the Gonabadi Dervish protesters in the Pasdaran district of the capital, Iran’s Fars news agency reported on Tuesday.

A Gonabadi Dervish member drove the vehicle involved in the attack, it said. Al Jazeera could not independently verify the information.

In a separate incident, a member of the government-aligned Basij volunteer militia group was reportedly rammed by a car and another stabbed to death, according to Press TV.

Press TV reported as many as 30 security forces and protesters were also injured during clashes.

Another photo showed several people blocking a street and burning objects to prevent police from moving forward. There were also reports of torched vehicles and other damage to private property.

Tasnim news agency reported as many as 300 people have been arrested.

Members of the Gonabadi Dervish religious order protested on Monday following reports that its ageing leader, Noor Ali Tabandeh, may be imprisoned by authorities.

As of Tuesday, there were no reports that Tabandeh, 90, had been arrested. The social media account Majzooban said several supporters of the religious leader were rounded up by authorities.

For years, members of the Gonabadi Dervish have complained of religious persecution and frequent imprisonments. 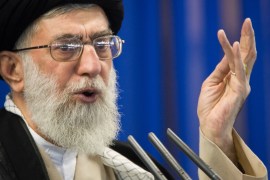 A somber revolutionary anniversary in Iran

The 39th anniversary of the revolution in Iran promises to be a somber occasion for Supreme Leader Ali Khamenei. 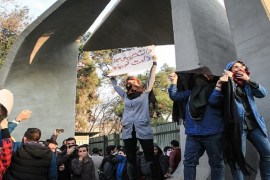 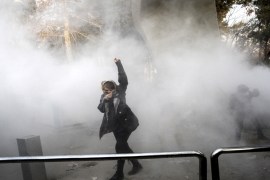