Mexico‘s most powerful earthquake in a century has killed at least 61 people, destroyed homes and sent panicked families fleeing into the streets, according to officials.

The US Geological Survey (USGS) reported the magnitude of the earthquake that hit southern Mexico late on Thursday as 8.1, but President Enrique Pena Nieto said on Friday it was 8.2, making it the largest in Mexico in 100 years.

He also said it was bigger than the one in 1985 when thousands were killed in four Mexican states.

The tremor’s epicentre was 123km southwest of the town of Pijijiapan, at a depth of 70km, according to USGS. 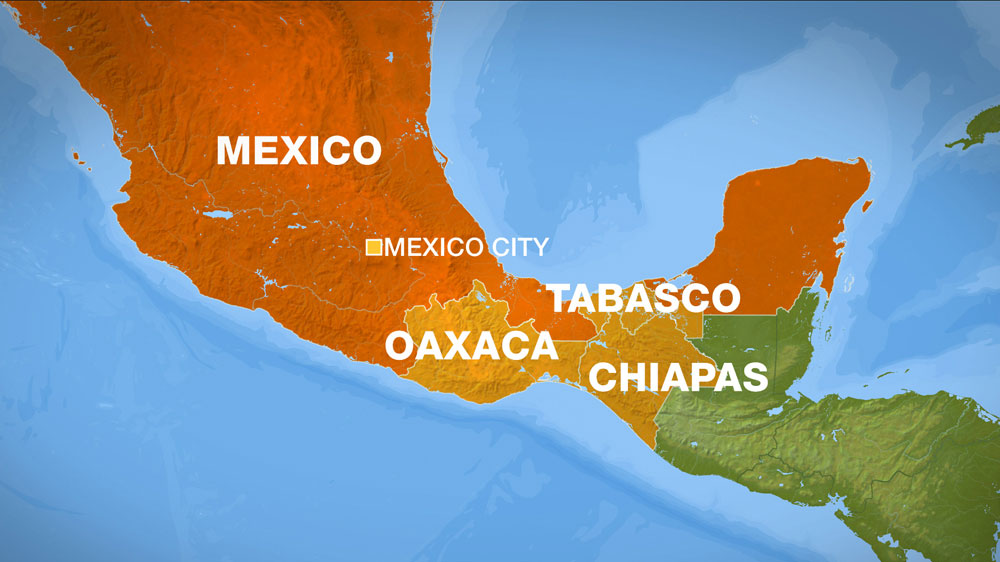 “It was a large-scale earthquake,” Pena Nieto said. “It had a bigger magnitude than the one Mexicans knew in 1985,” when thousands were killed in four states in the country.

Some of the worst initial reports came from the town of Juchitan in Oaxaca state, where sections of the town hall, a hotel, a bar and other buildings were reduced to rubble.

READ MORE: These are the deadliest quakes of the past 100 years

Pena Nieto said that at least 45 people were killed in Oaxaca, 12 in Chiapas and four in Tabasco.

Officials also warned that the death toll could rise.

Alejandro Murat, governor of Oaxaca state, said 17 of those killed were in Juchitan.

“The situation is Juchitan is critical; this is the most terrible moment in its history,” the town’s mayor, Gloria Sanchez said.

Two children were also killed in Tabasco state. At least 250 people in Oaxaca were also injured, according to Agriculture Minister Jose Calzada.

Chiapas Governor Manuel Velasco said that 12 people were killed in San Cristobal, including two women who died when a house and a wall collapsed. At least 120 people were also injured.

Velasco called on people living near the coast to leave their houses as a protective measure.

“There is damage to hospitals that have lost energy,” he said. “Homes, schools and hospitals have been damaged.”

Pena Nieto said that serious damage had been caused and that one million people initially had been without power following the quake, but that electricity had been restored to 800,000 of them.

“The house moved like chewing gum, and the light and internet went out momentarily,” said Rodrigo Soberanes, who lives near San Cristobal de las Casas in Chiapas, a poor, largely indigenous state popular with tourists.

The civil defense in Chiapas said on its Twitter account that its personnel were in the streets aiding people and warned residents to prepare for aftershocks.

Al Jazeera’s David Mercer, reporting from Mexico City on Friday, said the “devastating” earthquake had hit some of the country’s least well-off areas.

“The states of Chiapas and Oaxaca are where the deaths are coming from – they are close to the Guatemelan border and they are also the poorest states in Mexico,” he said.

“A lot of people there are living in very old houses that are made out of mud brick,” Mercer added.

“This is really where the rescue workers are putting their focus right now, while Enrique Pena Nieto has announced that he will be travelling to the southern state of Chiapas on Friday afternoon to assess the rescue efforts.”

The quake was so powerful that frightened residents in Mexico’s distant capital city fled apartment buildings, many in their pyjamas, and gathered in groups in the street.

“Not another one. God, please no,” said one woman, falling to her knees to pray.

“I was driving when the ground started to shake. The car was wobbling,” said Cristian Rodriguez, a 28-year-old Uber driver in Mexico City.

“There have been half a dozen of magnitude five and four aftershocks reported already,” Randy Baldwin, a geophysicist with US Geological Survey’s National Earthquake Information Center, told Al Jazeera.

“There are possibilities that the aftershocks will probably continue for the next several months.”

Tsunami waves have been measured off Mexico’s Pacific coast; the Pacific Tsunami Warning Center said waves of one metre above the tide level were measured off Salina Cruz.

It was also felt in much of Guatemala, which borders Chiapas, and El Salvador.

Mexican officials ordered schools to remain closed on Friday in cities across 10 states, including Mexico City, so that officials could inspect for structural damage.

Al Jazeera’s Mercer said there were helicopters hovering over the area monitoring the damage caused by the quake.

“There are not enough reports about the damage caused yet but as day light comes, I am sure they are going to get a better grasp on that information,” he said.

Smaller tsunami waves were observed on the coast or measured by ocean gauges in several other places.

The centre’s forecast said Ecuador, El Salvador and Guatemala could see waves of a meter or less.

No threat was posed to Hawaii and the western and South Pacific.

Lucy Jones, a seismologist in California who works with the US Geological Survey, said such quake was to be expected.

“Off the west coast of Mexico is what’s called the subduction zone, the Pacific Plate is moving under the Mexican peninsula,” she told Associated Press news agency.

“It’s a very flat fault, so it’s a place that has big earthquakes relatively often because of that.”

“There’s likely to be a small tsunami going to the southwest. It’s not going to be coming up and affecting California or Hawaii,” she said.

“For tsunami generation, an eight is relatively small.”