Phnom Penh, Cambodia – Each morning, Chab Vanna started his day with the radio. Each night, he’d end it the same way. For the past 15 years, radio served as Vanna’s primary source of news – the rare reliable, Khmer-language reporting available in the country. And then one day late last month, it stopped.

“At first I thought that there were electric problems or a station issue,” Vanna recounted, sitting inside the small repair shop he runs in Cambodia’s capital.

“I didn’t realise that the station had shut. But I turned it on, and it was blank, and when I went to Facebook, some people said it had closed.”

Last week, the US-funded Radio Free Asia closed its Phnom Penh bureau, switching from an open, in-country radio broadcaster to an offshore model that mimics its operations in countries such as Tibet and North Korea. The broadcaster – Cambodia’s most popular – said it had little choice but to close in light of the current media climate.

Across Cambodia, nearly a dozen independent radio stations broadcasting through 32 radio frequencies in almost every province have seen their licenses suspended without notice.

“It’s a devastating blow to the free flow of unbiased information across the Cambodian countryside before pivotal national elections next year,” Crispin told Al Jazeera.

Though smartphones and relatively inexpensive internet access have rapidly expanded the reach of Facebook, Cambodia’s poorest and most remote populations remain heavily reliant on the radio.

With television almost entirely dominated by government affiliates (a Reporters Without Borders report found eight of the 10 main channels “belong to owners who are politically affiliated with the ruling party”), radio still plays a key role in providing independent news to many.

“I think Facebook is the top [means of getting news], but radio is also accessed by people in towns, in remote areas – anyone who wants to get objective reporting of the news,” said Yi Chhorvorn, managing director of the Phnom Penh station.

As with other stations, Moha Nokor was taken aback by the notice from the Ministry of Information saying its license had been revoked after failing to properly report its programming line-up – an accusation management denies.

After sending three petitions to see its license reinstated, Moha Nokor has yet to return to the airwaves. The Ministry of Information has repeatedly defended its actions, meanwhile, saying the stations broke their contracts and stressing there is no “political” angle.

“The listeners still call our phones and say they want the news and ask when we will reopen,” said Chhorvorn. “We just inform them to please wait, and we are trying.”

The phone calls that continue to trickle in from their audience attest to the power of the airwaves. Though Chhorvorn demurred from attributing a reason to the closures, listeners were quick to counter the government’s narrative.

“The government doesn’t want people to have knowledge of everything, especially the issues related to politics or social issues. When people get independent news, the government is afraid they will lose the election,” said Vanna.

Cambodia’s ruling party has intensified pressure on the media, NGOs, and the opposition in recent months, ahead of the July 2018 elections – which are expected to be extremely contentious. Earlier this month, Cambodia National Rescue Party President Kem Sokha was arrested and charged with treason for allegedly colluding with the United States to overthrow the government.

The Cambodia Daily – the country’s highly regarded, longest-running English daily newspaper – shut its doors on September 4 after being ordered to pay a $6.3m tax bill that many believe to be politically motivated. Last week, Mother Nature, a prominent environmental group, suspended its operations citing ongoing harassment.

Radio Free Asia‘s own closure, meanwhile, was prompted in part by threats against its reporters, said its director of public affairs Rohit Mahajan.

In the past, the broad reach of radio has helped counter government narratives in some of the ruling party’s oldest strongholds, pointed out Mahajan. In 2013, the ruling Cambodian People’s Party lost 22 seats, leaving it with just 55 percent of parliament’s 123 seats.

“You can’t ignore the political reality of this,” said Mahajan. “I was looking at some of the places from the 2013 election where we had FM radio in different provinces in the country outside of Phnom Penh, and those are the places where the ruling party lost a lot of support. And that trend was also felt in this year’s [commune] election as well. People are very aware that we give a platform to critics, a means for them to reach a wider audience.”

Ros Lin, a community representative from Preah Vihear and member of the Kuy indigenous minority, said he was certain the government “is not satisfied with critical reporting”.

“They reported exactly what happened and what is wrong,” he said. Now that it could not be heard, I think our plights or voices – especially related to land grabbing by the companies or illegal logging by the powerful and the rich – will not be reported. It means that our community seems to live in the dark without any sunlight,” he said.

Some, however, are hopeful that Cambodia’s growing internet reach will provide traditional broadcasters with a means of reconnecting with much of its audience.

A study carried out last year by Open Institute, USAID, and the Asia Foundation reported that already 30 percent of respondents described the internet as their most important source of news – twice that of radio.

In the past month, engaged users shot up 21 percent to 180,000 a day, and daily video views grew by more than half to 400,700. Whether such growth is enough to counter the closure of radio is an open question.

If the blackout is meant to sway the election, Vanna, for his part, said the tactic would fall short of its mark.

“I don’t believe it will work. Now people have more and more understanding,” he said. 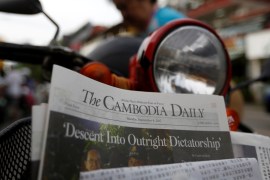 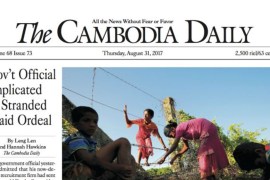 Cambodia Daily to close after tax fight with government

Newspaper says Monday’s edition will be its last after receiving $6.3m tax bill, which it calls politically motivated.