Lahore, Pakistan – Former Pakistani Prime Minister Nawaz Sharif’s PML-N party is facing its first major political challenge on Sunday in a by-election widely seen to be a barometer for whether he has managed to maintain support in his political heartland following his dismissal from office.

Sharif’s wife Kulsoom will be running for the parliamentary seat vacated by her husband after his disqualification by the Supreme Court in July over an omission in his parliamentary wealth declaration.

Voting was under way in Lahore on Sunday, after campaigning for the seat concluded late on Friday night.

On Friday, the Supreme Court dismissed petitions seeking a review of its decision to disqualify Sharif, although a separate bench is still deliberating on whether the ban on holding public office is permanent.

The court also referred Sharif, three of his children and several aides to an anti-corruption court for trial on charges that he looted state wealth during his previous two terms as prime minister in the 1990s.

Campaigning in the NA-120 constituency, located in the heart of the eastern city of Lahore, has been fierce, with the PML-N chief’s daughter Maryam Nawaz – herself facing corruption charges – leading more than a month of rallies and campaign events.

Kulsoom Nawaz, 66, has spent much of the campaign undergoing treatment for her recently diagnosed lymphoma in the UK.

Nawaz’s party has won the parliamentary seat consistently since it began contesting elections in 1985.

Analysts say Sunday’s by-poll will be a key indicator as to whether Sharif’s dismissal has led to an erosion of support.

“This constituency is right in the middle of Lahore, so we will see how the public is taking [the Supreme Court verdict].

“If they lose the public sentiment here, then the narrative against them has really taken hold.”

Javed expects Sharif to hold onto the constituency, but feels the poll is an important bellwether for upcoming national elections in mid-2018.

“If [the opposition candidate] Yasmin Rashid wins, even by 200 votes, then the Nawaz Sharif story is over.”

The NA-120 constituency, home to almost half a million of Lahore’s 11 million residents, is located in the heart of the old city, and includes the historic Lahore fort and the shrine to Daata Ganj Baksh, the city’s patron saint.

On Thursday, Imran Khan led a rally of his Pakistan Tehreek-e-Insaf (PTI) party through the constituency, attracting hundreds of party supporters in a bid to gather support behind Rashid, his party’s candidate.

Khan’s party is running their campaign on a platform of being anti-corruption and calling for new leadership in the country’s politics.

A middle-class professional doctor, Rashid gained more than 52,350 votes in the constituency when she last ran in 2013, ultimately losing to Nawaz Sharif’s 91,683 votes. The constituency is considered a Sharif stronghold, and he won 60 percent of all votes cast in that election.

This time around, PTI supporters say they are hoping for a win, but will settle for narrowing the margin of defeat.

“This election is a way for people to show their reaction to the Supreme Court verdict,” said Jalal Shah, 32, who was selling T-shirts with the popular cricketer-turned-politician Khan’s image on them at the rally.

“If she comes close, it will be a very big thing.”

Many of the participants at the rally appeared to have travelled from other districts, however, and therefore would not be eligible to vote in Sunday’s poll.

“I would vote for any candidate that Imran Khan put his name behind, whoever it is,” said Aamer Raza, 38, who travelled from the town of Wazirabad, about 115km away, for the event.

The PML-N’s strength in Punjab province, of which Lahore is the capital, has been at the heart of its national success. In 2013, it won 131 out of 147 parliamentary seats available in the province.

The party has traditionally done well with businessmen and traders, attracting them from a platform of offering infrastructure development projects and policies that led Pakistan to register economic growth of 5.74 percent last year.

“They are a great party for traders and listen to our concerns,” says Babar Taimuri, 44, who sells garments off Lahore’s main Mall road. “They have really taken care of their voters.”

That is a sentiment echoed by others in the trader community across the narrow, maze-like lanes of the sprawling constituency.

“The PTI, their people do not listen to us,” says Muhammad Nabeel, 22, sitting at this family’s wholesale timber shop in the Bilal Ganj neighbourhood. “The PML-N will come to us, they will listen to our concerns, patiently.”

The ruling PML-N and PTI parties are not the only ones contesting the election, however.

At a campaign event in the Neela Gumbad neighbourhood, Sheikh spoke to hundreds of party supporters, many of whom were drawn to him by the work done by LeT’s charitable arm, the Jamaat-ud-Dawa (JuD).

The image of Hafiz Saeed, the founder of LeT and chief of JuD, who carries a US-government sponsored $10m bounty on his head and currently remains under house arrest by Pakistani authorities, was prominent on Sheikh’s electoral posters across the constituency.

“All of the country’s leaders are busy stealing, while [the JuD] is working religiously and righteously for the people,” said Zia ul Islam, 40, an NA-120 voter who attended the MML rally.

About a kilometre away from the MML rally, scores of the faithful lined up to enter the shrine of Daata Ganj Baksh, one of the most revered Sufi saints in Pakistan.

Inside, the scene seemed a world away from the riot of election banners and rallies taking place outside, as the official period for campaigning wound to a close. The crowd surged, far larger than at any of the political parties’ campaign events.

“Daata is Daata. These politicians are not even worthy of being the soles of his shoes,” said Muhammad Idrees, 50, sitting a few feet away. 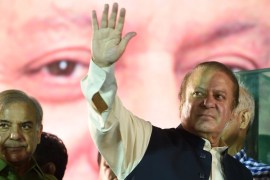