The United Nations human rights chief has said that Venezuelan security forces may have committed “crimes against humanity” against protesters and called for an international investigation.

“My investigation suggests the possibility that crimes against humanity may have been committed, which can only be confirmed by a subsequent criminal investigation,” Zeid Ra’ad al-Hussein told the UN Human Rights Council on Monday.

Venezuela’s foreign minister defended the record of the government of President Nicolas Maduro, rejecting the allegations as “baseless”.

Venezuela has been convulsed by months of demonstrations both for and against Maduro, who critics say has plunged the oil-rich country into the worst economic crisis in its history and is turning it into a dictatorship. At least 125 people have been killed in clashes with police since the protests began.

Zeid said the government was using criminal proceedings against opposition leaders, arbitrary detentions, excessive use of force and ill-treatment of detainees, which in some cases amounted to torture.

“There is a very real danger that tensions will further escalate, with the government crushing democratic institutions and critical voices,” Zeid said.

The opposition, which boycotted the election for the Constituent Assembly, has accused electoral authorities of inflating turnout figures for the July 30 vote. It also called the new assembly and its sweeping powers a rubber-stamp mechanism for Maduro to rule as a “dictator”.

However, Foreign Minister Jorge Arreaza said that following the election, “the opposition in Venezuela is back on the path of rule of law and democracy”.

READ MORE: All the latest updates on the Venezuela crisis

Arreaza accused protesters of using firearms and “homemade weapons” against security forces but noted that the last death was on July 30. “Our country is now at peace,” he added.

Venezuela is among the 47 members of the Human Rights Council, where it enjoys strong support from Cuba, Iran and other states.

Diego Arria, who was Venezuela’s ambassador to the UN from 1991 to 1994, told a separate Geneva event organised by activists and action group UN Watch that Venezuela should be referred to the prosecutor of the International Criminal Court (ICC).

“I am convinced that the killing in the streets equates to crimes against humanity,” he said.

The Hague-based court defines such crimes as including torture, murder, deprivation of liberty, sexual violence and persecution, he said.

“There is no right to express a different political opinion without being threatened, beaten or imprisoned,” she told the same event. 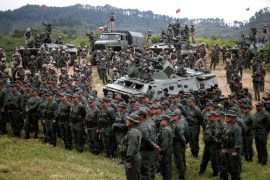 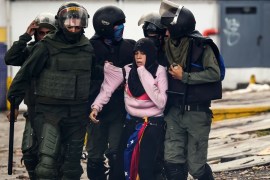