Sierra Leone entered a week-long mourning period for the victims of the flooding that has killed more than 300 people, with fears that the death toll could rise as 600 remain missing.

AFP news agency reported on Wednesday that among the dead were at least 105 children.

Three days of torrential rain triggered mudslides on Monday in the Regent area of the Sierra Leonean capital, Freetown. It also caused massive flooding elsewhere in the city, one of the world’s wettest urban areas in the world.

A Red Cross official told AFP that the death toll was around 300 people on Tuesday evening.

READ MORE: Sierra Leone mudslide: What, where and when?

In a statement on Wednesday, President Ernest Bai Koroma’s office asked relatives to come to the city’s overwhelmed mortuary. All unidentified corpses will be given a “dignified burial” in the coming days, it said.

Satellite images released on Wednesday showed the extensive damage caused by deadly mudslides and floods that have rendered about 3,000 people homeless.

The United Nations said on Tuesday it was evaluating the humanitarian needs in the West African country of seven million people.

“Contingency plans are being put in place to mitigate any potential outbreak of waterborne diseases such as cholera, typhoid and diarrhoea,” UN spokesman Stephane Dujarric said.

He said the UN has mobilised its staff and is helping rescue and evacuate residents, while providing medical and food assistance to the injured and registering survivors.

Radio journalist Gibril Sesay said he lost his entire family. “I am yet to grasp that I survived, and my family is gone,” he said through sobs, unable to continue.

Ahmed Sesay, the caretaker of a two-story house near the Guma Valley Dam east of the capital, said he was sleeping around 6:00 GMT when he felt a vibration.

“It was like an earthquake. I ran out of my quarters to the gate of the compound,” he said. “The ground shook, and I had to stay outside the compound until daybreak,” Sesay added.

‘We have started burying’

Sulaiman Zaino Parker, an official with Freetown’s city council, said 150 burials took place on Tuesday evening and that many would be laid to rest in graves alongside victims of the country’s last humanitarian disaster, the Ebola crisis, in nearby Waterloo.

“We have started burying some of the mutilated and decomposed bodies. All the corpses will be given a dignified burial with Muslim and Christian prayers,” Parker said.

The graves would be specially marked for future identification, he added.

On Tuesday, President Koroma issued a desperate appeal for help, saying the damage was “overwhelming us.”

The government of Sierra Leone, one of the poorest countries in the world, has promised relief to thousands of people left homeless, opening an emergency response centre in Regent and four registration centres.

The Red Cross said it was struggling to excavate families buried deep in the mud that engulfed their homes.

“We are racing against time, more flooding and the risk of disease to help these affected communities survive and cope with their loss,” said Abu Bakarr Tarawallie, a Red Cross official. 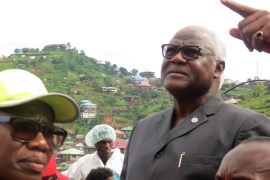 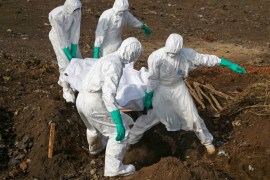 The lingering shadow of Ebola outbreak in Sierra Leone

People affected by the Ebola virus are showing signs of post-traumatic stress disorder a year after epidemic defeated. 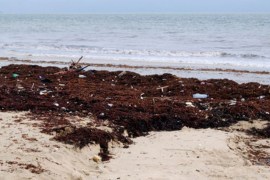