A brash businessman with martial arts skills has clinched Mongolia’s first ever presidential runoff election after his opponent conceded defeat in the scandal-plagued race to take the helm of the resource-rich but debt-laden country.

Khaltmaa Battulga, of the opposition Democratic Party (DP), won with 50.6 percent of the vote on a 60.9 percent turnout, giving him the majority needed to overcome his opponent, parliament speaker Miyeegombo Enkhbold of the ruling Mongolian People’s Party (MPP).

Election officials are still, however, waiting on a final count of votes from abroad.

Recognising he was down for the count, Enkhbold thanked his supporters in a concession speech broadcast on Facebook, saying that he would “respect and accept the presidential results”.

“Although the MPP couldn’t succeed in this election, the cabinet will keep working to complete our agenda of overcoming the financial crisis for the well being of our people,” said Enkhbold.

He added that he had spoken to the sitting president about “transferring power as well as presidential stamp in the parliament house which also ends the election”.

Meanwhile, Battulga promised his supporters in the capital Ulaanbaatar’s Independence Square he would “push the government in order to complete all their work”.

“We did this thanks to the power of the people,” said Battulga.

More than half of the country’s population is under the age of 30.

“During the election campaign, the main issues for people were the economy, unemployment, China and the fact that Mongolia needs to find other trading partners,” he said.

“The first priority for the new president will be dealing with the economy.”

Battulga, the real estate tycoon, whose company funded a massive $4.1m statue of emperor Genghis Khan, has pledged to tap the country’s mining wealth to get Mongolians out of debt.

The president will inherit a $5.5bn IMF-led bailout designed to stabilise the country’s economy and lessen its dependence on China, which purchases 80 percent of Mongolian exports.

The former Soviet satellite’s economy grew by a measly one percent last year, a stark contrast from an impressive 17 percent in 2011.

It has been hit hard by a more than 50 percent fall in the price of copper, its main export, over the past five years, while the slowing growth of its biggest customer, China, has hobbled the economy. 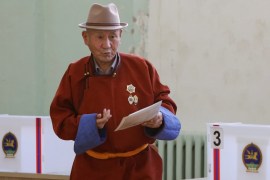 Presidential race went into a runoff after none of the three candidates won a majority in last month’s election. 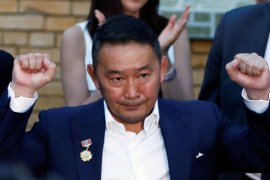