According to a report published by the Times on Saturday, Fahmy received a substantial “loan” from the UAE’s ambassador to the US, Yousef al-Otaiba, to cover his legal campaign against Al Jazeera following his release from an Egyptian prison in 2015.

Fahmy, along with nine other colleagues, were accused of spreading “false news” during their coverage of the aftermath of the military overthrow of then president Mohamed Morsi in 2013, the year they were taken into custody.

Fahmy spent 437 days in jail before being released.

The Egyptian judge who sentenced the journalists said they were brought together “by the devil” to destabilise the country.

Fahmy is currently taking legal action against Al Jazeera and is suing for over $100m, saying the network knowingly endangered his life.

In February 2015, Fahmy began corresponding with Otaiba who offered to arrange coverage on the UAE-based TV channel SkyNews Arabia, according to the New York Times.

“SkyNews to take it live would be awesome, I think a nudge to their C.E.O. could make it happen,” Fahmy wrote.

“Already done,” Otaiba responded. “Let’s hope they can get there.”

After the news conference, Fahmy is reported to have written to the ambassador, “I plan to keep the pressure on through the media” and alluded to documents from Qatari opposition that would “embarrass the government”.

The Times also reported that Fahmy asked for money: “I am looking for a personal loan with a written agreement to pay back on success plus interest, and or a profit margin.”

According to the paper, in October 2015 Otaiba emailed an Egyptian businessman, Tawfik Diab, to arrange a transfer of $250,000 to an account under Fahmy’s name.

“The money is in,” Fahmy wrote, and he promised “a progress report that we were planning to send to AD” – presumably Abu Dhabi, the capital of the UAE.

“My team here will start working on the media blitz to revive the case in US media,” he added.

In May 2016, Fahmy emailed information about his personal checking account in Vancouver to Otaiba, the report said. But it is unclear how Otaiba responded.

Fahmy claimed that the money for the lawsuit had gone to a third party, whom he refused to name.

“I have not received a penny from Yousef,” he told the Times.

The newspaper also reported that Fahmy falsely denied coordination with Otaiba in a news conference the journalist held in Washington on June 22 under the banner, “Al Jazeera on Trial”.

At the conference, Fahmy added his voice to Saudi and UAE accusations that Qatar and Al Jazeera have conspired with “extremists”.

“Qatar has been given so many chances, and they have been warned so many times,” he said, commending the Saudi-led blockade.

Asked if he had consulted Saudi or Emirati officials, or if he was close to Otaiba, Fahmy said, falsely, “to simply answer your question, no.” Fahmy said this past week that he was protecting a friend.

Since the start of the Gulf crisis, Fahmy has been vocal in his support for the blockade and has praised the Saudi offensive.

In an apparent attempt to spur unrest in Qatar, Fahmy also launched the hashtag #GoodbyeTamim. 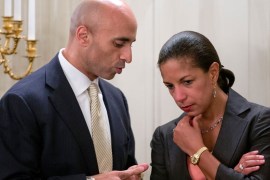 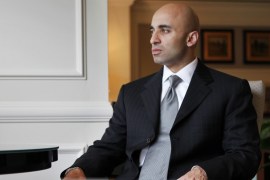