Iran’s Revolutionary Guard Corps has accused Saudi Arabia of being behind Wednesday’s double attack in the capital Tehran that left at least 13 people dead.

The Islamic State of Iraq and the Levant (ISIL, also known as ISIS) group claimed responsibility and released a video purporting to show gunmen inside the parliament building.

The Iranian elite force vowed in a statement on Wednesday to seek revenge.

“The fact that Islamic State has claimed responsibility proves that they were involved in the brutal attack,” referring to Saudi Arabia.

Saudi Minister of Foreign Affairs Adel al-Jubeir, speaking in the German capital of Berlin, said he did not know who was responsible and there was no evidence Saudi nationals were involved.

“They have patrons, they have associates in the Middle East and beyond. Saudi Arabia is one of the main suspects because of its ideology that goes well with what the ISIS fighters feel, think and believe,” he said. 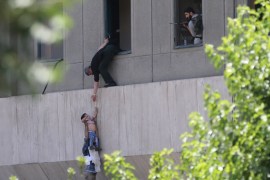 At least 13 dead in attacks on parliament and Mausoleum of Ayatollah Khomeini in Tehran, as ISIL claims responsibility.