Qatar’s ministry of defence has announced the arrival of a new group of Turkish armed forces to the military base where Turkey began its training mission last week.

The forces are set to take part in joint exercises within the framework of a defence agreement signed between Doha and Ankara aimed at raising Qatar’s defence capabilities, supporting “counter-terror” efforts, and maintaining security and stability in the region.

Khalid bin Mohammed al-Attiyah arrived on Thursday at Ankara where he is scheduled to meet with his Turkish counterpart Fikri Ishik as well as Turkish President Recep Tayyip Erdogan.

Turkey’s parliament on June 8 approved the 2015 deal with Qatar aimed at strengthening military cooperation between the two states, which gave Turkey the right to establish military bases in the emirate and deploy military forces.

The deal’s approval came three days after Saudi Arabia and other Arab countries severed diplomatic ties with Qatar over allegations that it supports “terrorism” and is too close to Iran – charges Doha has repeatedly denied.

Five armoured vehicles and 23 military Turkish military personnel arrived in Doha on June 18. At the time, Turkey’s Hurriyet newspaper reported that there were already at least 88 Turkish soldiers in Qatar.

The number of Turkish soldiers sent to the Gulf state could eventually reach 1,000, Turkish daily Hurriyet reported, adding that an air force contingent was also envisaged.

Joint exercises were expected to start after the Eid al-Fitr holiday.

The Turkish military base in Qatar is a first for Turkey in the Arab World. 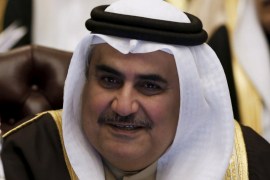 Bahrain’s FM in about-turn over Turkish base in Qatar 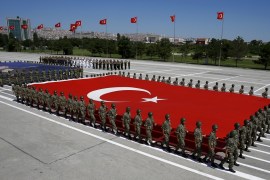