A police helicopter has dropped grenades on Venezuela’s supreme court building and fired shots at the interior ministry in what President Nicolas Maduro called a “terror attack” against his government.

Information minister Ernesto Villegas said the stolen helicopter first fired 15 shots on the ministry in Caracas, the capital, as a reception was taking place on Tuesday.

It then flew a short distance to the supreme court building and dropped four grenades, two of them near the national guardsmen protecting the building.

Maduro said no one was injured as the grenades failed to detonate during the incident.

The attack occurred as Maduro was speaking live on state television to journalists gathered at the presidential palace.

“I have activated the entire armed forces to defend the peace,” he said.

However, opponents on social media accused the president himself of trying to spread fear to help justify a crackdown against Venezuelans seeking to block his plans to rewrite the constitution.

Maduro has been facing three months of opposition protests and some dissent from within government ranks.

An Associated Press news agency reporter heard gunfire as a helicopter buzzed over downtown Caracas but was unable to confirm where the shots were being fired from.

Around the time of the attack, a video appeared on social media in which a police squad pilot, identified as Oscar Perez, called for a rebellion against the Maduro’s “tyranny”.

“We have two choices; be judged tomorrow by our conscience and the people or begin today to free ourselves from this corrupt government,” he said.

Perez read his statement with four people dressed in military fatigues, ski masks and carrying assault rifles standing behind him.

Phil Gunson, a senior analyst at the International Crisis Group, told Al Jazeera that this was a “very strange incident”.

“It seems, on the one hand, to have been an isolated incident, with no response so far from any military units that we can tell,” said Gunson, speaking from Caracas.

“It could be that this is just a few crazy people trying to set off some kind of coup, or it could indeed be some kind of fake incident that the government is using in order to justify a further crackdown,” he said.

Al Jazeera’s Teresa Bo, reporting from Caracas, said details were still emerging on what was a “confusing incident” on a “very tense night”.

“The government says they have identified the group [responsible] and they say they will detain them as soon as possible,” she said.

“This is happening at the same time that the supreme court announced that they will allow the government to call martial law in the country after the protests that have happened here for almost three months,” said Bo.

She said that the supreme court had also announced it was removing the immunity of lawmakers – “especially of opposition legislators, who the government accuses of promoting the protests that have already caused dozens of deaths,” said Bo.

Earlier on Tuesday, Maduro warned that he and supporters would take up arms if his socialist government was violently overthrown by opponents who have been on the streets protesting for three months.

“I’m telling the world, and I hope the world listens after 90 days of protest, destruction and death,” Maduro said in reference to anti-government unrest that has led to at least 75 deaths in the OPEC nation since April.

“If Venezuela was plunged into chaos and violence and the Bolivarian Revolution destroyed, we would go to combat. We would never give up, and what couldn’t be done with votes, we would do with weapons, we would liberate the fatherland with weapons.”

Maduro, 54, was speaking at a rally to promote a July 30 vote for a special super-body called a Constituent Assembly, which could rewrite the national charter and supersede other institutions such as the opposition-controlled congress.

He has touted the assembly as the only way to bring peace to Venezuela. But opponents, who want to bring forward the next presidential election scheduled for late 2018, say it is a sham poll designed purely to keep the socialists in power.

They are boycotting the vote and protesting daily on the streets to try and have it stopped.

Opposition leaders call Maduro a dictator who has wrecked a once-prosperous economy, while he calls them violent coup leaders.

Maduro, who accuses Washington of backing his opponents and seeking to control the nation’s oil wealth, said the “destruction” of Venezuela would lead to a huge refugee wave dwarfing the migrant crisis in the Mediterranean.

Opposition to the July 30 vote has come not just from Venezuelan opposition parties, but also from the chief state prosecutor Luisa Ortega and onetime government heavyweights like former intelligence service boss Miguel Rodriguez.

At a news conference on Tuesday, Rodriguez criticised Maduro for not holding a referendum prior to the Constituent Assembly election, as his predecessor Chavez had done in 1999.

“This is a country without government, this is chaos,” he said.

The country has the world’s largest oil reserves but is facing the worst economic crisis in its history, with acute shortages of food and medicine. The International Monetary Fund is forecasting more than 1600 percent inflation this year.

Analyst Phil Gunson told Al Jazeera there have been a number of reports and rumours over the past few weeks of discontent within the armed forces.

“But so far that discontent … has not translated into a split in the armed forces, and this is clearly what everybody’s waiting for,” said Gunson.

“Because, if President Maduro can retain the support of the armed forces, then he seems to be relatively secure in his position – at least in terms of holding off the opposition demonstrations.” 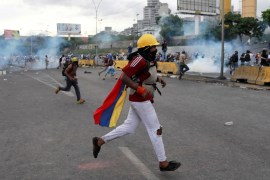 As new protests flare, a war of words breaks out between Caracas and the head of the Organization of American States. 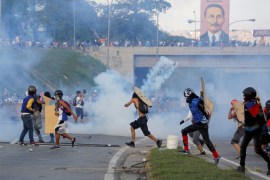 A man claiming to be a former boss of the Venezuelan president calls for probe into killing of his son during unrest.