The statement comes a few days after Saif al-Islam Gaddafi was reportedly released from prison in the North African country’s western city of Zintan.

An arrest warrant was issued by the ICC in 2011 for crimes against humanity – including murder and persecution – allegedly committed in Libya in the same year as the conflict in which Muammar Gaddafi was ousted from power.

The warrant “remains valid and Libya is obliged to immediately arrest and surrender [Saif al-Islam] Gaddafi to the ICC, regardless of any purported amnesty law in Libya,” Bensouda said in a statement.

Saif al-Islam was released on Friday under a general pardon issued by the elected parliament based in the eastern city of Tobruk, local media reported. He then left Zintan for an undisclosed location.

In 2015, a Libyan court in the capital, Tripoli, sentenced Saif al-Islam to death on charges related to killings during the country’s 2011 uprising. He had been in custody in Zintan since his capture in
late 2011, which came after his father was killed.

“It is imperative for both suspects to be apprehended and immediately surrendered to the custody of the ICC so that their guilt or innocence can be established … for justice to be done, and seen to be done,” Bensouda said

Libya descended into chaos after Gaddafi’s toppling. The North African country is split between three governments: two in Tripoli and one in Tobruk. 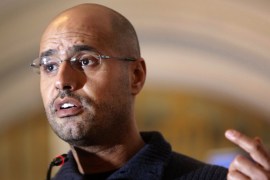 Zintan-based militia releases Saif al-Islam, the son of Muammar Gaddafi, who was toppled in 2011 uprising. 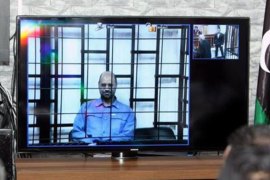 Son of slain Libyan leader sentenced in absentia to die by firing squad along with other members of former regime.